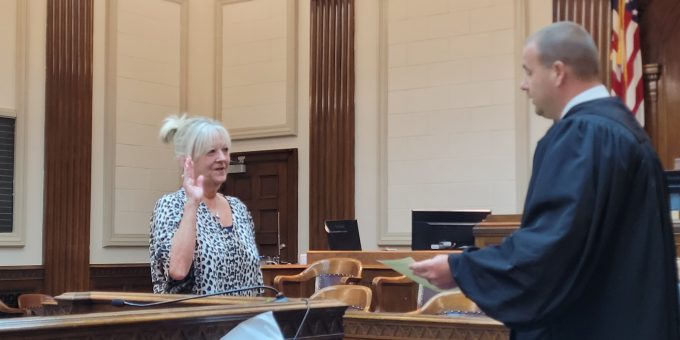 Judge Nikirk took a moment to discuss the importance of the recorder position and its importance in the Indiana State Constitution and how he knew former Lawrence County Recorder Myron Rainey was looking down enjoying the moment with them.

“This position was the first position created in the constitution,” Judge Nikirk said. “This is a neat position to have because of the importance of keeping records together after leaving England, and I know Myron is probably looking down and calling the play-by-play for us here today.”

Allen had worked under Rainey as his First Deputy until his untimely passing in May. Since being named his successor on Saturday, July 23rd, she has been in a whirlwind of emotions, and hopes to make Rainey proud, “I just feel really honored that I can fill his position, I’ll make him proud,” said Allen.

Allen will fill out the remainder of Rainey’s term, and will continue to serve the community with honesty, integrity, and loyalty.