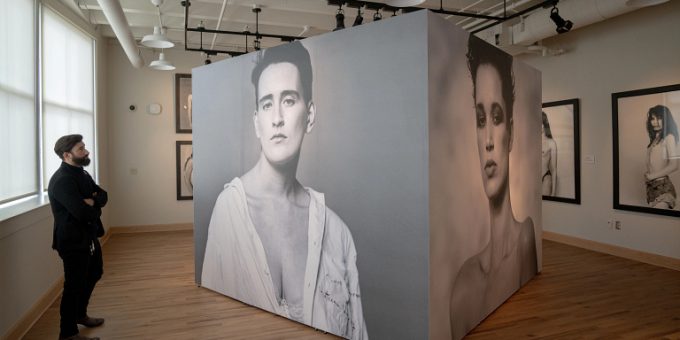 BLOOMINGTON – The latest exhibition from the Kinsey Institute features pieces by French photographer Bettina Rheims, widely known for her contemporary photography and her work with former French President Jacques Chirac. “Everything All at Once” features photographs of transgender, gender nonconforming, and gender nonbinary individuals shot by Rheims from 1989 to 1991.

The pieces were part of her “Modern Lovers” and “Espionnes” series in which Rheims photographed people who subverted gender stereotypes while allowing the observer to focus on the beauty and humanity of each portrait subject. The exhibition is free to the public and will be on display at the historic McCalla School through December.

Since the Kinsey Institute was founded 75 years ago at Indiana University Bloomington, the institution’s archive has grown to house the world’s largest research collection of materials pertaining to sex, sexuality, and gender. The Kinsey Institute Library & Special Collections archive includes art, film, photography, and other media materials that span more than 2,000 years. The works offer the public a better understanding of human sexuality worldwide and throughout history, according to the institute.

The Rheims photographs have been housed within the Kinsey Institute collections for several years. Kinsey curator Rebecca Fasman said that while the photographs are decades old, they still feel contemporary — both stylistically and conceptually — because they address ideas that are part of public discourse today.

“I think Bettina was struck by how society was treating people who are visibly queering gender norms,” Fasman said of Rheims’ work, which was created at the height of the AIDS pandemic and the subsequent backlash toward LGBTQ communities. “These are important stories to tell in order to reflect back on what’s changed and what hasn’t.”

Rheims often focused her art on the concepts of gender, voyeurism, and androgyny. Her first series, titled “Portraits,” premiered in 1980 and featured striptease artists and acrobats. Throughout the 1990s, her work included portraits of celebrities, such as Madonna and Sharon Stone. She shot fashion campaigns for Chanel, Lancome, Marie Claire, and Elle. In 1994, Rheims was awarded the Grand Prix de la Photographie Paris for her works.

The pieces in “Everything All at Once” were inspired by individuals Rheims felt embodied the spectrum of gender identity. In an interview with “The Darkroom Rumour” to promote her film “Gender Studies,” Rheims said she first became fascinated by gender fluidity after seeing androgynous models at a casting call in 1986.

“Instead of what you would have seen on TV in the ’80s and ’90s, where it was kind of a cookie-cutter version of what was thought to be the ideal body or the ideal sexuality, she was holding up a mirror to the reality that existed in society,” Fasman said.

Fasman wants visitors to be able to interact and share their experiences as part of the exhibition. Along with a reading library where patrons can borrow books, pamphlets, and other materials, there is a bulletin board where they can write their own experiences or thoughts from the exhibition and pin them to the wall.

“I love an activity where you get to see people’s responses; I find that to be as compelling as what is on the wall,” Fasman said. “I want to know how people are receiving this and what they’re thinking about.”

Fasman encourages visitors to recommend items for the library that she can include.

“Maybe there are members of the community who have had really profound experiences reading a certain book about gender identity,” she said. “Let me know, and we will buy it.”

Fasman said she and her Kinsey colleagues hope that visitors find enjoyment and reflection within the exhibition.

“‘Everything All at Once is a spectacular exhibition with the stunning photography of Bettina Rheims paired with Rebecca Fasman’s thoughtful curatorial work,” said Justin Garcia, executive director of the Kinsey Institute and Ruth N. Halls Professor of Gender Studies. “This exhibition is a reflection and celebration of the gender and sexual diversity that is all around us. Many thanks to our colleagues at the Kinsey Institute, University Collections, and everyone who has shown up to support this exhibition and the great work it represents, continuing the Kinsey Institute’s 75-year legacy of exploring human diversity.”