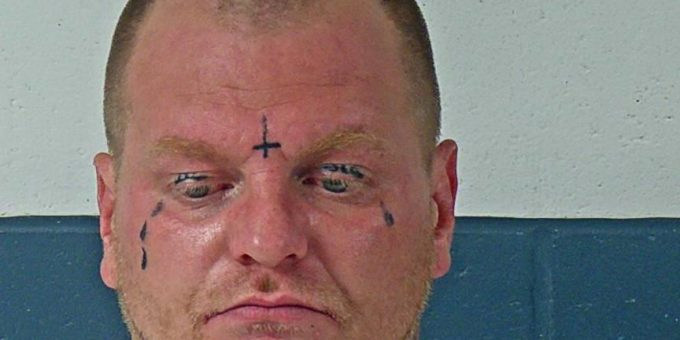 Officers secured the search warrant from Judge John Plummer III after allegations that 39-year-old Christopher Davis, of Mitchell, was in possession of an unknown amount of firearms paired with his criminal history.

Officers executed the search warrant at 10:45 p.m. SWAT detained Davis and the residence was secured.

Also in the home were his wife and 3-year-old daughter.

In a bedroom, in a dresser officers located a small piece of paper that was rolled up containing three Alprazolam pills.

Outside of the residence, officers were located in an open pack of Marlboro cigarettes which contained two cigarettes and two plastic baggies containing crystal meth. The cigarette pack was located in front of a chair Davis was sitting in as police arrived. Police seized 7 grams of meth.

Police also located 50 small alcoholics “shooter” style bottles throughout the residence. Davis later admitted he is on probation and is not supposed to be consuming alcoholic beverages.

Police were given consent to search Davis’ Ford Escape. Inside they found a .380 caliber bullet that was laying in the center console. In the passenger floorboard, police found a Ruger holster.

Outside the residence, an officer had a conversation with a male who was walking a dog on 3rd Street and was a friend of Davis. The man told police Davis had given him the gun and that Davis had kept the gun on a shelf by the mini-fridge. He said he would bring the gun to the police.

A few minutes later the man returned with a silver handgun that had been stolen reported stolen in Texas. The handgun had one bullet in the magazine, the same ammunition police located in Davis’ vehicle.

Davis then admitted, “it is all mine man, all of it, it’s mine”.

Davis told police he was tired of this life and wanted to “get right for himself and his family”.

Davis was asked about the high volume of vehicle and foot traffic coming from his residence throughout various times of the day and night. Davis then admitted he only sold about two “8-balls” worth a day which is about 8 to 10 grams. He admitted he would sell a quarter gram for about $25 dollars. Davis said he never measured the meth but would  “eyeball” it and the meth was pure and not cut with any other product.

He told police he began dealing drugs about 6 months ago to make money after he lost his job.