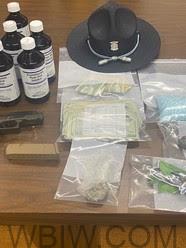 GRANT CO. – Last night, a dispute with a Lyft driver led to the arrest of Zavion Davis, 20, Ft Wayne, IN.

Davis was incarcerated in the Grant County Jail to face criminal charges for dealing in a narcotic drug with enhancing circumstances, possession of marijuana, possession of a handgun by a dangerous person, possession of a legend drug, and resisting law enforcement.

At approximately 8:10 p.m., officers responded to 5498 North Grant County Road 500 East because a Lyft driver had activated a panic alarm from his vehicle. When the officers located the Lyft driver, he told them he had a dispute with a passenger, later identified as Davis. The driver told Davis to get out of his car, which he did, and the driver no longer needed police.

Indiana State Police Trooper Edward Titus located Davis on the roadside at State Road 18 near Grant County 500 East. As Titus was speaking with Davis, he noticed indicators that criminal activity could be afoot. Titus also allegedly smelled the odor of marijuana emitting from Davis. During further investigation, Titus was securing Davis in handcuffs when Davis allegedly pulled away. Titus quickly regained control and handcuffed Davis. During a search of Davis, Titus purportedly found marijuana.

During a search, incident to arrest of bags possessed by Davis; Titus allegedly located approximately 12 ounces of fentanyl pills, a loaded handgun, and seven bottles of promethazine. Davis also had $11,866.00 of United States currency in his possession. Due to Davis allegedly having a pending felony case for resisting law enforcement, he is prohibited from possessing a handgun.

Titus was assisted with this investigation by officers from the Grant County Sheriff’s Department, Trooper Andrew Baldwin, and Trooper James Wilkison.

Law enforcement officers encourage anyone with information about the possession, distribution, or manufacturing of illegal narcotics to call their local law enforcement agency or the Indiana State Police Drug Tip Line at 1-800-453-4756. Information can be reported anonymously.