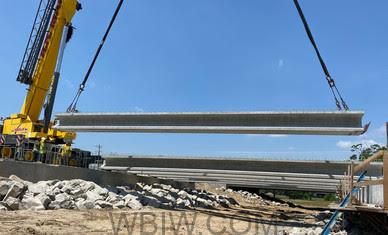 INDIANA – Bridge crews restored traffic across the brand-new Madison Avenue bridge over I-465 this past weekend to one lane in each direction. All four lanes of Madison Avenue and the sidewalks along the bridge are expected to fully open later this week.

Madison Avenue is the third of five I-465 overpasses the I-69 Finish Line project has replaced. The new bridges will provide safe travels for many decades to come and make room for future I-465 lanes on the southwest side of Indianapolis.

Madison Avenue closed in late February and was rebuilt from the ground up ahead of schedule. The Mooresville Road Bypass and South Keystone Avenue bridges were replaced successfully, and the Mann Road bridge is currently in progress.

Carson Avenue, just west of I-65, is the fifth I-465 overpass to be replaced. It’s expected to close on Sunday, July 24 for about six months. Click here to view a map of the detour, which will follow Keystone Avenue and Thompson Road.

I-465 traffic should continue to expect nighttime lane closures and intermittent traffic stoppages near the bridgework. Crews expect to close the right lane of I-465 eastbound on Wednesday night near the Carson Avenue overpass and the exit to I-65 southbound.

Indiana Southern Railroad is scheduled to close S.R. 39 and repair the railroad crossing near Morgan Street in Martinsville after 6 p.m. on Saturday. Watch for crews patching pavement along S.R. 39 during the closure and for the road to reopen before Monday morning. Click here to learn more.

Final paving and striping work are scheduled next week on I-69 and the S.R. 252 interchange in Martinsville. Expect nightly I-69 lane and S.R. 252 ramp closures.

Stay alert for two traffic signals to be turned on in the coming weeks. One is located on Ohio Street at the Ruth Rusie Way entrance to Artesian Square Shopping Center. The other is where Artesian Avenue intersects Commercial Boulevard and Southview Drive.

The Mann Road and Thompson Road intersection and the on-ramp to I-465 eastbound have reopened. Road improvements were completed during a long weekend’s worth of work.

Cranes are lifting large bridge beams into place this week for the future I-69 northbound bridge over County Line Road. Expect the right lane of State Road 37 northbound to be closed after 6 p.m. on Monday and Tuesday nights.

Follow us on social media and subscribe to email and text updates about upcoming roadwork and bridge beam installation. It’s expected to close Banta Road at State Road 37 and partially reopen the nearby Edgewood Avenue intersection as a temporary alternate route.

The I-69 project and Johnson County are completing separate projects to replace drainage pipes under County Road 144 east of S.R. 37. Click here to see a map of the closures. C.R. 144 is expected to reopen in about a week.

Slow down and stay alert for mowing crews working along S.R. 37 traffic in the work zone.