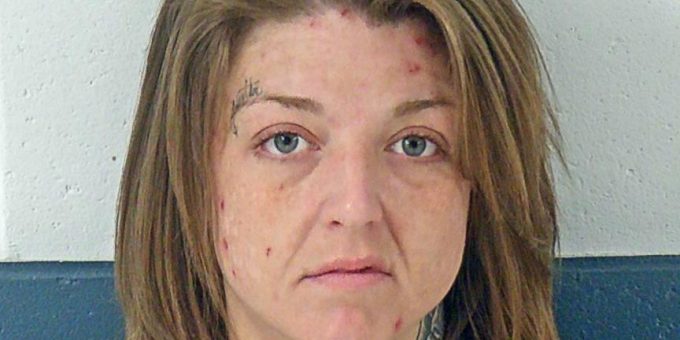 Upon arrival, the officer was advised of a white or silver Chevrolet Impala with two passengers in the vehicle, one appeared to be jumping around, moving erratically, and appeared to be under the influence of drugs.

The occupants of the vehicle were identified as 31-year-old Shandi Reynolds of Bedford, and a male passenger. Reynolds was asked to exit the vehicle, where she continued to behave in an erratic behavior.

Reynolds claimed she and the male passenger got in an argument and pulled over to talk and clean out the car. Reynolds denied having any illegal substances in the vehicle. A K-9 unit arrived on scene to perform a search of the vehicle, with K-9 Zazu alerting to a positive result in the car.

Officers located several miscellaneous bags, trash, and tools inside the vehicle. A black plastic container containing a bag with a plant-like material that field tested positive for marijuana inside was located. Officers continued searching the vehicle and located a black backpack that contained two syringes and a small bag of a crystal-like substance that field tested positive for methamphetamine.

Reynolds claimed the bag belonged to her mother, claiming she had just gotten it from her. Reynolds was arrested on the charges of possession of methamphetamine, illegal possession of a syringe, and possession of marijuana