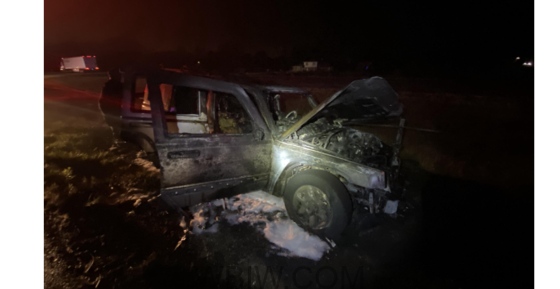 INDIANAPOLIS – An Indianapolis woman was pulled from a burning vehicle by good Samaritans this morning after a single-vehicle crash on I-74. At 1:11 this morning Indiana State Police Dispatch began receiving 911 calls about a crash and vehicle fire on I-74 near the 96-mile marker. First responders from the Indianapolis Fire Department were first on the scene, they found a silver Jeep fully engulfed in flames and a female lying on the ground near the wreckage being tended to by bystanders. The woman was later transported to a local hospital.

Preliminary investigation revealed the driver of the silver Jeep, Jasmine Meagher of Indianapolis, had driven off the road and struck the cable barrier in the median, the vehicle then caught fire. At least two Good Samaritans witnessed the crash and stopped to help. According to investigators, Craig Gay entered the vehicle through the passenger door while it was on fire, cut the seatbelt off the driver, and pulled her to safety. The other man, John Goretskiy from Massachusetts, utilized a fire extinguisher to hold back the flames as Gay pulled the driver out. Both men then assisted the female until first responders arrived. Gay was treated at the scene by paramedics for smoke inhalation.

Indiana State Police Sergeant Jon Caddell said, “If it wasn’t for these two men we could be investigating a fatal crash this morning, their heroic actions and selfless response saved a life”

Investigators are still trying to determine what caused Meagher to drive off the road and strike the cable barrier. It is believed there were more people who stopped to help but they left prior to police arriving. Ms. Meagher was conscious and alert when she was transported to the hospital.

The investigation is ongoing and there is no further information to release at this time.