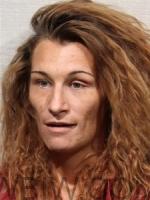 SEYMOUR – A Medora woman was arrested in Seymour after being caught with items stolen from several area stores.

Seymour Police Officers were called to the Walmart Thursday after a woman was seen on video footage taking electronics from the store.

The video showed the woman identified as 29-year-old Kennedie Miller obtaining keys and a security tag removing device, then unlocking a cabinet and taking the electronic devices.

An officer found Miller at a store Thursday and she was detained.

A search revealed she was carrying other people’s identification and credit cards as well as clothing from other stores with the price tags still attached. Police say that Miller had used two of the credit cards for transactions at Walmart.

After obtaining a search warrant for a purse that Miller did not have in her immediate possession when arrested, police discovered the keys, the security removal tool and the electronic devices, along with cell phone SIM cards.

Miller was arrested on preliminary charges of theft, criminal trespass, and fraud.

More charges are expected to be filled for the stolen clothing items.