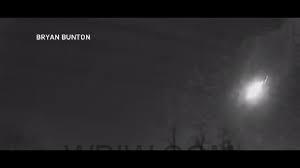 INDIANA – The American Meteor Society has confirmed that a fireball was spotted over central Indiana early this morning.

A fireball is a meteor that is larger and brighter than normal.

The fireball was reported seen in Indiana, Kentucky, and Ohio.

“Biggest and brightest one I saw and I have seen 30 showers, and one other big yellowish one as a kid. But this lit the yard up like daytime. I thought someone had shined a spotlight on me till looked up and there’s goes a meteor the size of a horse,” wrote Corey G from Spencer on the website.

Videos of the event “most definitely” show a fireball, says Robert Lunsford, a member of the American Meteor Society.

Agnis F, of Martinsville, spotted the meteor and said, “had a lot of big trees blocking my view so I didn’t get to see how far down it fell.”

Lunsford says one of the witnesses close to the projected path of the fireball reported hearing sounds coming from it, “which indicates that it survived down to the lower atmosphere and may have let small fragments called meteorites on the ground.

Walker S, from Carbondale, Ill., reported, “It was an unmistakable event. Literally breathtaking. Shooting star as big as the moon.”

The American Meteor Society estimates that roughly 50,000 fireballs enter the earth’s atmosphere every year, but most of them go unseen because they appear during daylight or over unpopulated areas like the ocean.