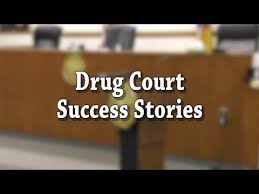 BEDFORD – Tuesday morning was a time of celebration for two individuals who graduated from Lawrence County Superior Court I Problem Solving Court.

Robert Lee and Duane Sharp were honored today at the graduation, for their diligence and hard work to make themselves better.

Superior Court I Judge John Plummer III began the celebration by addressing those in attendance, reflecting on how important days like this are to the court system of Lawrence County.

“Days like this are always the best, as we get to see these graduates and their success in getting to this point,” said Plummer. “We are a family here in the Court System, and good news is hard to come by in courts throughout the United States, so having this today needs to be shared.”

Judge Plummer then discussed the importance of the course, and the team behind the scenes working together to make today possible.

“Being a team is how we can succeed together, and having that ability to lean on each other helps us get here today,” Plummer said. “Something we try to remind each of our participants is to not overload your truck. What I mean by that is focus on yourself and make yourself better, by following the steps in this course. By using the tools set up for each individual to succeed, it helps bring the risk of repeating their offenses to nearly zero.”

Robert Lee spoke first and recounted how he felt when he was making his decisions and how they affected his family, before participating in the course.

“I was always hateful and felt I was a huge disappointment,” Lee said. “I lost job after job, and house after house as I allowed drugs and alcohol to run my life. Through this course, things became clearer to me. I started actively listening in AA and attending therapy for myself, putting things together made me fearless, and knowing that its ok to be simple took a lot of weight off of my shoulders. I am not embarrassed by my past , as I embrace it. This program will make you the person you want to be.”

Lee continued with saying how proud he was to stand there, in front of other graduates, those involved with the program, and his family.

“It means a lot, having my family and friends back, actual friends in my life. Its been a lot to take in, phase one was the hardest, but after that it went by so quick,” Lee said. “I put peace, love, and tolerance in my life and it has worked to get me here now.”

Duane Sharp then shared his struggles in getting to this point and how much it meant to him to stand in front of everyone, proud of what he has accomplished.

“Sobriety, a loving family, and having self-confidence was a big thing and still is. Just having the ability to build up my character truly means the most to me,” Sharp said.

Sharp shared what growing up was like and what led him to make the decisions that put him at risk of serving time behind bars, and how grateful he is for this program.

“I was a shy, introverted kid and my parents tried to get me out of that. Going between my parent’s homes and their different styles of parenting made it difficult for me,” Sharp shared. “I started to get depressed, and finally lashed out at my mom. Having it bottled up for so long and finally releasing it led me to where I am now. I began chasing the bad with the bad, drugs and alcohol helped me feel better for a short time, but I always came back down.”

“I was in a cycle of addiction, that led me to a cycle of violence,” said Sharp. “This class offered me the tools to apply to my life to make me build self-confidence and help me out of that cycle. I could not have done it without the support of the team and their unwavering support.”