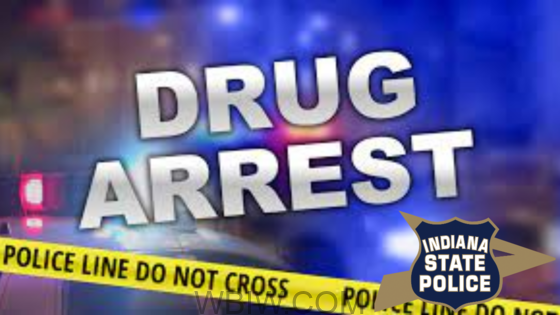 SEYMOUR – Monday June 27th a traffic stop by an Indiana State Trooper resulted in a Jennings County woman being arrested on numerous charges related to dealing and possession of methamphetamine and marijuana.

Shortly before 11:00 a.m., the Indiana State Police received information from the Seymour Police Department and Jennings County Sheriff’s Office that a possible wanted person was traveling in a vehicle on the east side of Seymour, Indiana. Trooper Randel Miller soon located the Honda Accord, being driven by Kelli Cravens, 44, of North Vernon, on US 50 near US 31.

Trp. Miller conducted a traffic stop on Cravens’ vehicle for a traffic infraction. Upon speaking to Cravens, she initially provided a false name to troopers. Cravens was soon arrested on a felony warrant out of Jennings County.  After indicators of criminal activity were observed, Trp. Miller deployed K-9 “Bosco” to conduct a sweep of the vehicle. Bosco alerted to the odor of illegal drugs coming from Cravens’ vehicle.

During a search of the vehicle, troopers located approximately 25 grams of suspected crystal methamphetamine, marijuana, and drug paraphernalia.