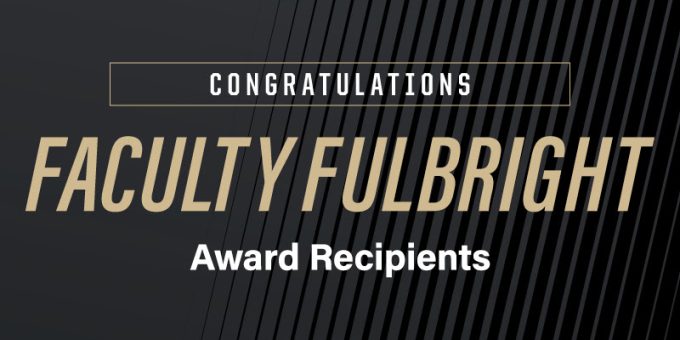 WEST LAFAYETTE — Studying nonlinear interfacial waves, developing solutions for clean propulsion, and analyzing the development of heritage languages in the classroom environment are some of the research projects representing five Purdue University faculty who have been named U.S. Fulbright Scholars. These faculty members will complete their research in educational institutes and research facilities around the world.

The Fulbright Program is the flagship international educational exchange program sponsored by the U.S. government. The program aims to increase mutual understanding between the United States and other countries. Purdue University was recognized earlier this year for joining the elite list of Fulbright top-producing institutions.

Siegfried-Spellar will live in Spain researching the “Online Grooming Strategies of Child Sex Offenders in Spain.” Her host will be the University Research Institute of Criminology and Criminal Science at the University of Valencia

Alejandro Cuza, professor of Spanish and Portuguese, College of Liberal Arts. Cuza will live in Mexico while examining “The Development of Spanish and English as Heritage Languages During Childhood: Implications for Classroom Instruction in Mexico and the United States.”

He will be hosted by the Universidad Autonoma de Queretaro.

He has been awarded the Fulbright Distinguished Scholar Award in Alternative Energy Technology. He will be hosted by the Chalmers University of Technology, Gothenburg, Sweden.

Zolton Machaty, professor in the Department of Animal Sciences, College of Agriculture.

Based in France, Machaty will focus on “Identifying Regulators of Nerve Cord Morphogenesis.” His host is the Villefranche-sur-Mer Developmental Biology Laboratory.

The goal of his research is to work with world experts to unravel the physics of tunable ferrofluid interfaces. Christov will be hosted in Cyprus.

Since its establishment in 1946, more than 400,000 students, scholars, and teachers have been awarded, Fulbright fellowships. Fulbright alumni have achieved distinction in many fields, including 60 who have been awarded the Nobel Prize, 88 who have received Pulitzer Prizes, and 39 who have served as a head of state or government.

The deadline for applying to the Fulbright 2023-24 competition is September 15, 2022. For more information on the Fulbright Faculty Award Program, email Christopher Lukasik, provost fellow for Fulbright faculty awards, at clukasik@purdue.edu.