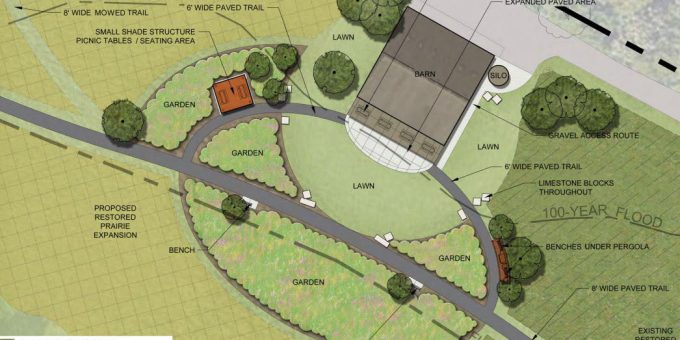 Installation of safety bollards on Morton and 8th Streets scheduled for June 6th was postponed due to supplies. Installation is now expected to begin on the 20th. These bollards will separate Farmers’ Market customers from vehicle traffic. Once installation begins, it will take up to four days to complete at each entrance. While the Morton side bollards are being installed, access to the City Hall parking lot will be from 8th Street. The closure will then be reversed with access from Morton.

Plans for upgrades to the 33-acre Goat Farm property on East Winslow Road are nearly through the grading permit process. The Department hopes to make the park improvement project, which will include walking trails, seating, and an extension of the native prairie, available for bid this month. The Sherman Rogers family donated the property to the Bloomington Parks Foundation in 2007. The upcoming park upgrades are also made possible by the Rogers family, and the park will be renamed Rogers Family Park upon the conclusion of the project. Learn more at https://bton.in/uD3bB.

The Board of Park Commissioners at their May 24 meeting approved a contract with Lentz Paving to repair and resurface the tennis and basketball courts at Park Ridge East. Work is scheduled to begin as early as July. The courts will be closed during repair and resurfacing, then will be opened for 30 to 60 days, without lines, while the asphalt cures. The courts will be closed again to allow for painting and striping.

The City’s Hopewell Phase 1 East project is the first step for the City of Bloomington towards the redevelopment of the legacy downtown IU Health Bloomington Hospital site. The project limits of the Hopewell Phase 1 East project are bounded by 2nd Street to the north, 1st Street to the south, B-Line to the east, and Rogers Street to the west.  The project will create development-ready lots by demolishing existing structures, re-platting the property, installing utilities, constructing streets, landscaping and bicycle/pedestrian facilities. Unlike the main legacy hospital site west of Rogers Street where IU Health is responsible for demolition, the City of Bloomington agreed to oversee the demolition of the former IU Health property east of Rogers Street.

After a successful bid for the demolition of the Phase 1 East project area, the apparent responsive low bidder on the project was Renascent, Inc. The City will seek approval to award a contract for this phase of the project on Tuesday, June 21, at the Board of Public Works and the Redevelopment Commission meetings. Renascent, Inc. is headquartered in Indianapolis and is a certified 100% Women Business Enterprise.  Renascent is also the contractor for the IU Health demolition of the main legacy hospital site west of Rogers Street. Renascent has an impressive track record of successful demolition projects and looks to recycle a significant portion of the building materials removed from the site. The project is scheduled to begin in early July with a 60-day construction timeline. Additional information about the project and the contractor can be found at the following links: https://bton.in/mRp~I, hopewellbloomington.org & renascentinc.com/

Crews this week have been milling and paving Indiana Avenue from 13th to 17th Streets. Concrete crews have been installing ADA-compliant ramps in Gentry Estates ahead of a paving project there. Next week crews will begin installing ADA-compliant ramps on South High Street from East 2nd to Hunter Avenue and paving North Union Street from East 7th to Law Lane.