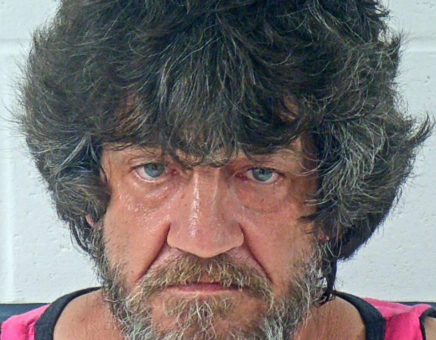 BEDFORD – Troopers from the Indiana State Police Bloomington District were recently advised that Timothy A. Brinegar, 58-year-old, of Bedford, was allegedly involved in the continued use and dealing of meth while currently out of jail on a cash bond after being arrested for dealing meth in January of 2019.

On Tuesday around 3:30 p.m., ISP A.C.E.S. Sgt. Greg Day located Brinegar in a 2015 Ford truck, at the intersection of Tunnelton Road and US 50. Brinegar was then observed turning west onto US 50 without properly utilizing his turn signal. Sgt. Greg Day stopped Brinegar. During the encounter, Sgt. Day observed indicators of alleged criminal activity and then Bedford Police Officer Faheem Bade arrived on the scene of the traffic stop and deployed his canine, Zazu, who gave a positive alert on the truck.

Troopers Chance Humphrey and Tyler Trueblood, along with Bedford Police Major Jesse Crane arrived to assist. Brinegar and his passenger had been asked to exit the vehicle to search the truck when Major Crane observed a baggie of methamphetamine on the ground next to Brinegar, who had tried to discard it. Brinegar was also found to have a second baggie of methamphetamine in his pants pocket.

A search of the truck revealed hypodermic syringes, digital scales with methamphetamine residue, and three firearms. There was a loaded .380 handgun in the cab of the truck, along with an unloaded .12-gauge shotgun. An unloaded .22 Magnum revolver was in the toolbox of the truck.

Brinegar was arrested and transported to the Lawrence County Jail for the following charges,

Anyone with information of illegal drug activity is requested and encouraged to call the Indiana State Police Bloomington Post at 812-332-4411, the Lawrence County Prosecutor’s Office tip line at 812-545-4700, or send an email to drugactivity@lawrencecounty.in.gov. All calls are confidential.