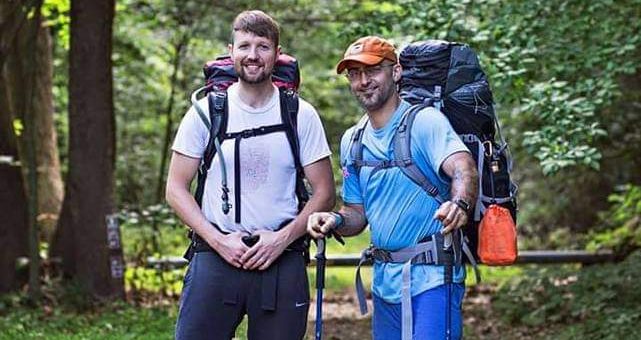 The Knobstone Trail is Indiana’s longest hiking trail and also Indiana’s most rugged trail. It is between 48-58 miles. It stretches from Deam Lake to Delaney Park. The discrepancies in length are due to the frequent re-routes and the fact that the trail makes use of a loop trail at Delaney Park, which gives two alternate routes to either finish or start (depending on what side you start from).

There are about 20,000 feet of elevation change through the course of the trail (one-way).

Mathews and Goodman have backpacked this trail twice.

“This time we’ll be going out and back for a 100-mile + trek. I have lots of experience with short-term backpacking and climbing trips that include Red River Gorge, the Appalachians, and the Rocky Mountains. Despite this, the Knobstone remains one of the most challenging treks I’ve done. The route has many ups and downs. The highest peak may only be 1000 feet but the hills are steep and are often lacking switchbacks. The first time we tackled this trail, Colby and I both pulled dozens of ticks off ourselves.”

The men also experienced severe chaffing that made completing the second day of the trek painful.

“When we tackled the trail the second time, we resolved to attempt to complete it in less than 24 hours and we succeeded,” added Goodman. “That occurred in the fall when the day-time temperatures were comfortable but the nighttime temperatures dropped to freezing or near freezing. Despite the cold weather, our clothes were drenched in sweat. I would stop occasionally and wring my shirt out. As exhaustion sat in, the threat of hypothermia became real. As night came on, a pattern emerged of feeling like you couldn’t go on anymore, you’d throw off your pack to try to get some relief only to be shivering from the cold within two or three minutes knowing you had to keep moving to keep from succumbing to hyperthermia.”

The men know going into this next trip, which will be twice as long as their previous hikes that it’s going to be challenging, painful, and mentally exhausting.

“We hope to make at least 25 miles a day,” added Goodman. “Taking our gear and the rugged terrain into consideration, this will likely translate into four 12-14 hour days of non-stop trekking. While Colby and I are doing this as a sort of annual physical and psychological challenge, I am the Democratic Nominee for Indiana House of Representatives District 65. Colby has become one of my core volunteers. He believes our backpacking trip is a good analogy for my fortitude and willingness to sacrifice comfort for a higher goal. I do think of myself as a fighter and I did spend two years as a candidate for the CIA’s National Clandestine Service. I am a physical fitness advocate but my philosophy toward physical fitness has always been more about being able to take care of business than it has been about maintaining a certain physique.”

Mathews pointed out that he believes it’s a good analogy for Goodman’s adaptability.

“Each of our attempts has been a learning experience. When we did it the second time we had learned hacks from our first time around which made us much more efficient the second time,” Goodman said. “We’re using this experience to hopefully make our third and more challenging effort a success. Colby believes this doggedness is something I’ll carry into office should I get elected. Personally, I would just like to call attention to this wonderful resource and applaud the volunteers that maintain it.”

The Knobstone Trail makes use of multiple state and county recreational areas. These are valuable resources to Hoosiers and demonstrate that you don’t need to leave Indiana to find an epic challenge.

“We will begin our trek on June 17th and hopefully conclude it on the 20th,” Goodman added. “I’ll be taking my Go-Pro and hopefully posting a video documenting the effort on our campaign’s Facebook page.”