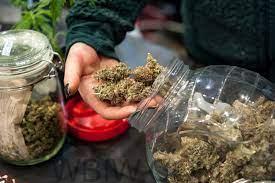 INDIANA – Marijuana will be discussed in a summer study committee being held by Indiana lawmakers.

Republican and Democratic leaders both approved an agenda that includes discussing delta 8, delta 9, and other THC products. The topic selection was part of the General Assembly’s one-day technical session.

The public health committee is tasked with studying delta-8, delta-9, and other THC products regarding potential health benefits, consequences, and decriminalization.

Delta-8 is a legal THC derivative that comes from hemp plants. A loophole in the 2018 Farm Bill opened the door for the substance when its language only mentioned delta-9 THC. Delta-9 is the chemical in cannabis that gets users “high.”

Senate President Pro Tem Rodric Bray (R-Martinsville) said the topic was added so lawmakers could get a better understanding of those products.

Sen. Mark Messmer is against the legalization of marijuana, citing issues with federally-backed banks being unable to work with businesses involved in marijuana.

Lawmakers studied cannabis for medical use in 2018, but pushes for any form of legalization have been unsuccessful.

The committee will meet later this summer at the Statehouse.