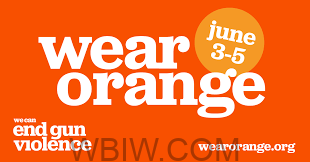 The Wear Orange movement originated on June 2, 2015, which would have been the 18th birthday of Hadiya Pendleton, who just one week after performing at President Obama’s 2013 second inaugural parade was shot and killed in Chicago. Hadiya was 15.

Following Hadiya’s friends’ color choice for the first demonstration, gun sense activists around the country now wear orange annually on National Gun Violence Awareness Day, and continue to do so through the accompanying weekend, known as “Wear Orange Weekend.”

“Gun violence is tragically familiar. At this very moment, we are reeling from horrific events in New York and Texas, even as we grapple with gun incidents in our own city,” said Mayor John Hamilton, who is one of 1,000 Mayors Against Illegal Guns who have pledged to work toward reducing gun violence. “Our community joins with cities across the nation in efforts to bring an end to the devastation of under-regulated guns. Community voices are important, and the symbolic community unity in wearing orange on June 3 speaks loudly.”

Bloomington Residents are invited to stop by Switchyard Park Pavillion (1601 S Rogers St.) on Saturday, June 4 starting at 8 p.m. where community members will honor victims of gun violence. The event includes a proclamation, speakers, and the raising of orange lanterns to remember all who are negatively affected by firearms.

Additional information is available at wearorange.org.