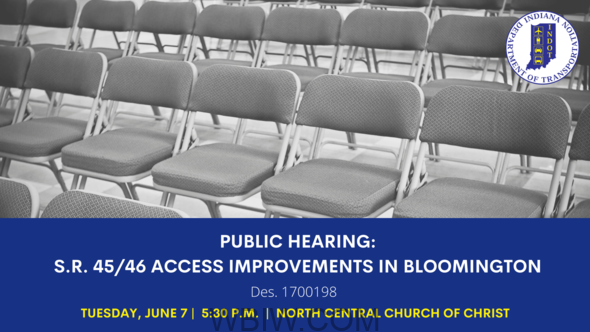 BLOOMINGTON — In partnership with American Structurepoint, the Indiana Department of Transportation will host a public hearing on Tuesday, June 7, for an access improvement project along S.R. 45/46 in Bloomington at North Central Church of Christ (2121 N. Dunn Street, Bloomington IN). The meeting will provide an opportunity for the public to learn more about the project, ask questions, and provide official comments to the project team.

As proposed, the just under $8 million project includes access modifications along S.R. 45/46 between Arlington Road and Walnut Street, specifically at the Monroe Street and Stonelake Drive intersections, as well as a new ramp at the Arlington Road overpass. A new reduced conflict intersection would replace the current access point at Stonelake Drive. Auxiliary left and right-turn lanes would be added to accommodate the new traffic pattern, in addition to the replacement of the storm sewer and impacted lighting in the area.

The purpose of the project is to improve local connectivity and reduce crash frequency along S.R. 45/46 between Stonelake Drive and Monroe Street. Construction would be completed in phases under lane closures and restrictions on S.R. 45/46 with an estimated start in the winter of 2023.

Reduced conflict intersections are used as alternatives to traditional intersections on high-speed, four-lane divided highways. Instead of vehicles crossing fast-moving lanes of mainline traffic to go straight or turn left, motorists on secondary roads turn right in the same direction of traffic at the RCI, merge into the left lane, and then make a U-turn in the direction they intend to travel. More information about RCIs can be found here.

Doors will open at 5:30 p.m. to allow the public time to view displays and interact with project personnel before the meeting. A formal presentation will begin at 6 p.m. Project information will also be posted on the INDOT Seymour District webpage prior to June 7 and can be viewed any time.

Questions and comments may be submitted in person at the information meeting, via email to Kaitlynn Walker (kawalker@structurepoint.com) with American Structurepoint, or by submitting a comment form on the project webpage.  All comments are requested by end of business on Tuesday, June 21.