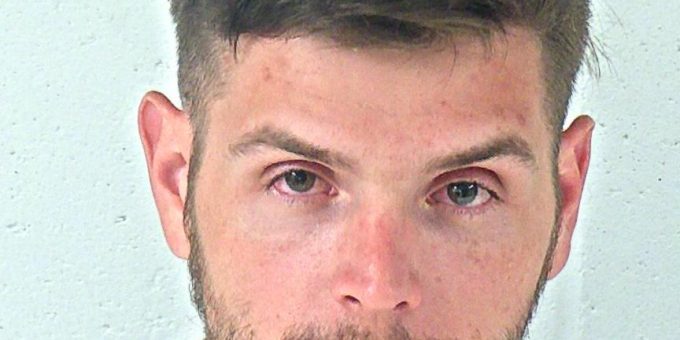 BEDFORD – A Heltonville man was arrested after he fled from an Indiana State Trooper Wednesday night during a traffic stop.

At approximately 11:28 p.m., Trooper Sam Gillespie was patrolling State Road 37 north of State Road 58 in Bedford when he observed a black 2012 black Dodge Avenger traveling north on State Road 37, above the posted speed limit traveling 76-mph in a 55-mph zone.

While in pursuit, the vehicle’s speed reached up to 100-mph but traveled the majority of the time at a much slower speed which included entering parking lots and circling businesses at SR 37 and Old SR 37.

With the assistance of Troopers Cody Brown and Ben Burris, Trooper Gillespie continued to pursue the vehicle on several county roads before entering Monroe County where the suspect began driving through multiple residential lawns to continue to evade the Troopers before striking Trooper Brown’s police vehicle.

After striking Trp. Brown’s commission, the vehicle continued until it reached a dead-end road where the suspect’s vehicle left the roadway and attempted to drive into a heavily wooded area. After it came to a stop, Troopers were able to detain the driver 27-year-old Cody D. Reeves, of Heltonville.

Reeves was driving on a suspended license, displayed characteristics of being impaired, and admitted to consuming controlled substances before the incident. Reeves was transported to local hospitals and a search warrant was applied for and granted, for the search of Reeves’s blood to determine impairment.

Once Reeves was released from the hospital, he was transported to the Lawrence County Jail and arrested on the following preliminary charges of resisting arrest, operating a vehicle while intoxicated with a prior conviction, driving with a suspended license with a prior conviction, reckless driving and operating a vehicle under the influence of a controlled substance.