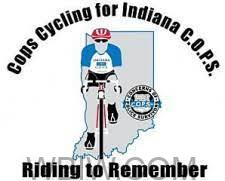 INDIANA – Cops Cycling for Survivors announced plans for their 21st annual bicycle tour of Indiana as well as unveiled the memorial photos on their support truck in anticipation of National Police Week.

In 2002, Cops Cycling for Survivors began with a ride to Washington, D.C. to honor fallen officers. The cyclists now ride through Indiana meeting with survivors of officers to support them as they continue to deal with the loss of loved ones. The group honors the more than 450 Indiana officers killed in the line of duty by reading a memorial for each officer during the tour.

Interested cyclists may also contact the group for more information on joining the ride for all or parts of the ride. Cyclists include survivors, law enforcement officers, and friends of law enforcement. The cyclist registration deadline is June 10, 2022.

In addition to memorializing Indiana’s fallen officers, Cops Cycling for Survivors raises financial support for survivors. Proceeds from the annual ride provide line of duty death benefits for primary survivors as well as fund scholarships, camps, and other avenues of support for survivors. The group also assists Line of Duty Death Justice as survivors work through years of court dates, including parole hearings and appeals.

More information and a donation page are found at http://www.copscycling4survivors.com/.

Cops Cycling for Survivors was granted 501(c) 3 status as a not-for-profit in late 2011 and is no longer directly affiliated with Indiana Concerns of Police Survivors (IN COPS).

Recent line of duty deaths in 2022 will receive special recognition next year. Dates and route locations for the 2022 Cops Cycling for Survivors ride are:

As the group rides through locations, area residents are encouraged to show their support for law enforcement officers and the survivors of fallen heroes in whatever meaningful manners may arise.