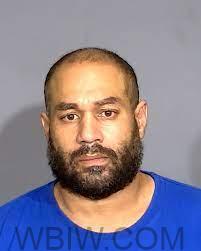 INDIANAPOLIS – Indiana State Police Detectives have made an arrest in the homicide of Dai-Ghia Hogan who was found deceased on I-70 on March 1, 2022.

Troopers responded to I-70 at 7:23 a.m. on March 1 when a report of a person lying in the gravel on I-70 westbound in the cross-over at the 93.1-mile marker, approximately a half a mile east of German Church Road overpass.

Detectives arrested 45-year-old Jason Rhea, of Indianapolis. He has been charged by the Marion County Prosecutor with murder and unlawful possession of a firearm by a serious violent felon.

At the scene, investigators recovered three .380 caliber shell casings, as well as a glass pipe believed to have been used to consume drugs. Physical evidence indicated the shooting happened where her body was found, according to the affidavit.

An autopsy found Hogan was shot in the head three times — twice in the right backside and once on the left side of her face near her chin. Her death was ruled a homicide due to multiple gunshot wounds.

Police learned after speaking with Hogan’s family that on Feb. 27 and 28, Hogan was at the Motor 8 Inn at 3731 N. Shadeland Ave., on the city’s northeast side.

On March 4, police obtained security footage, which showed Hogan was at the motel on Feb. 27 and 28 and March 1. The footage showed that about 5:16 a.m. the day of her death Hogan was seen leaving a room along with a woman and a man later identified as Jason Rhea. The group took off together in Rhea’s 2008 silver Dodge Avenger. Rhea drove, with Hogan in a back seat and the other woman in the front passenger seat, according to the affidavit.

A background check showed Rhea was listed as a witness to a homicide at the Motor 8 Inn but provided another person’s phone number to IMPD. Police later found his number through the call history of the other woman Rhea was seen with on the morning of Hogan’s death. Police found Rhea’s phone went to the location Hogan was killed and stayed there for about six minutes before heading back toward the motel.

Video surveillance showed Rhea and the other woman returned to the motel about 5:38 a.m. before leaving with two other people in the Dodge.

on April 14, police executed warrants for the phones of Rhea and the other woman. That search lead to police going to a home on Adams Street, where Reha’s Dodge was parked outside. A search warrant was later executed on that home, Police found drugs and a .380 semi-automatic handgun. The rounds in that gun matched the casings found where Hogan was killed, according to the affidavit.

In an April 15 interview with police, the woman who was with Rhea and Hogan on the day of the shooting admitted to getting in the Dodge and going to a gas station but said she had a seizure and fell asleep.

A few days later, DNA samples were collected from that woman and Rhea to be compared with those taken from the gun recovered from the Adams Street home. A swab of the muzzle of the firearm provided “very strong support for the inclusion of Dai-Ghia Hogan and Jason K. Rhea,” while the other woman was excluded as being a contributor”, according to the affidavit.

The gun was later confirmed as the one from which casings were recovered from the scene of Hogan’s death.