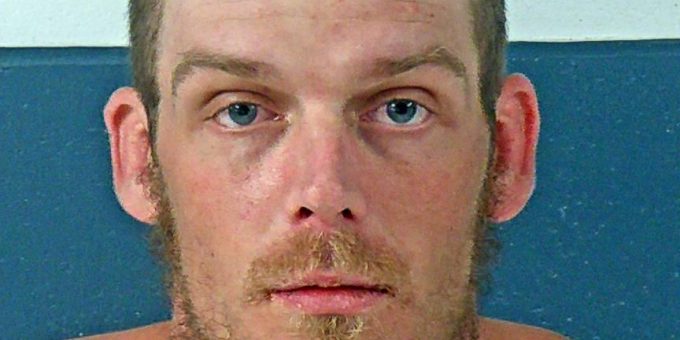 MITCHELL – A Georgetown man was arrested on Monday, May 2 when a Mitchell Police officer was dispatched to 611 West Warren Street after a report of a suspicious person.

While en route the officer was alerted by dispatch that the caller reported that an unknown, shirtless male with tattoos wearing a baseball cap was in his vehicle when he returned to his vehicle after taking groceries inside his home. The caller asked the male what he was doing and told the unknown man that he had called 911. It was at that time the unknown male exited the caller’s vehicle and fled on foot on North Sixth Street. The suspicious male left a vape and a multi-tool in the caller’s car.

When police arrived the suspicious male was found by a black pickup truck in front of the laundromat about a block from the caller’s home.

When the officer arrived at the laundromat he recognized 26-year-old Gage Leonard, of Georgetown, from prior law enforcement encounters.

Leonard was ordered to the ground and placed in handcuffs.

Police say Leonard appeared intoxicated and was “talking very fast and not making any sense”.

An ambulance was requested to the scene to perform a medical evaluation on Lenoard.

While the officer was talking to other people at the laundromat, Leonard was able to slip his handcuffs from behind his back to the front but the officers once again gained control of Leonard. When officers showed him the items he had left in the victim’s vehicle, Leonard said, “Hey, those are mine”.

The officer continued to communicate with Leonard but “he was still not making any sense, erratic in his movements, began to cry and then stop crying repeatedly,” the officer noted in the report..  Leonard was transported to IU Health Hospital and was medically evaluated and then transported to the Lawrence County Jail on a charge of unauthorized entry to a motor vehicle in the commission of a crime.