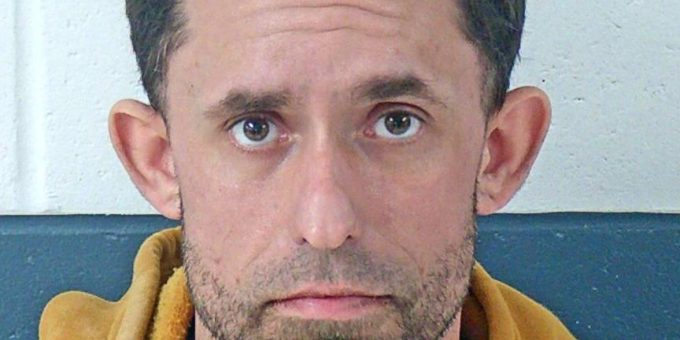 BEDFORD – A Springville man was arrested after a Bedford Police officer was flagged down at Dunham’s Sports Monday at 6:23 p.m. The person told police about a male driver’s behavior on State Road 37 and had followed the driver to Dunham’s Sports.

The complainant told the officer the male, later identified as 34-year-old Dustin Abbott, had a child with him.

The officer located Abbott and the child inside the store.  Police say Abbott appeared to be intoxicated and was swaying as he was walking.

While speaking to Abbott the officer noticed that Abbott’s speech was slurred and he had poor manual dexterity.

Abbott told the officer that a person had approached him in the parking lot when he arrived at the store and told him he “needed to find a ride home because he was all over the road.”

The officer searched Abbott’s pockets and found a cylinder container that contained hydrocodone powder. Abbott said he was prescribed the medication but preferred to snort it. But when tested, it tested positive for meth. The officer also found two rocks of meth in Abbott’s pocket. In Abbott’s truck, the officer found a glass smoking pipe containing marijuana residue and a black container with a small amount of marijuana inside.

Abbott failed several field sobriety tests but was negative for alcohol use on a portable breath test.

A warrant was issued for a blood draw and Abbott was transported to IU Health Hospital.