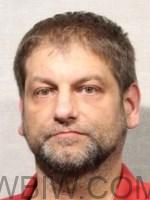 SEYMOUR – A Seymour man was arrested after police say he rammed another person’s vehicle and fired a gun during an incident Monday around 2 a.m..

The victim reported that after his vehicle was rammed, the other driver pointed a gun at him and fired several shots. The suspect was reportedly a resident of a trailer park in the 300 block of South Airport Road.

Simmons’ vehicle was towed and after receiving a search warrant, officers found a .22 pistol in the trunk with spent shell casings. It was seized as evidence.

Simmons allegedly admitted to police that he had fired the shots but said he wasn’t sure how many.