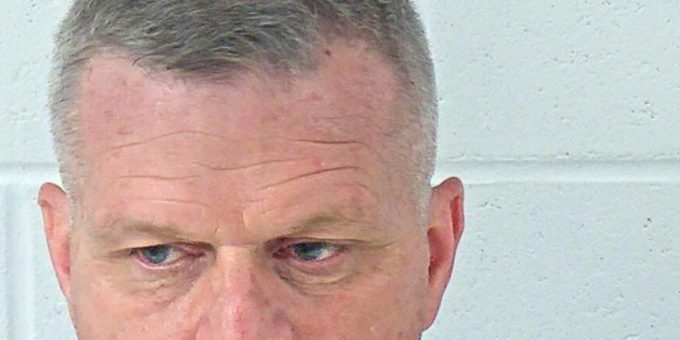 FAYETTEVILLE – A former Bedford North Lawrence School Board member and Indiana State trooper was arrested after he was stopped by a Lawrence County Sheriff’s Department deputy for driving while intoxicated.

On Friday, April 15th, at approximately 1:53 p.m. Lawrence County Central Dispatch was notified by Indian Creek Fire Department Chief Monte Wright, that a red SUV had collided with a utility pole in the area of 5138 State Road 450, and left the scene traveling east toward Bedford.

The driver of the vehicle struck the pole with enough force to cause the utility pole to break and the pole was blocking the roadway.

Officers responded to the area looking for the red vehicle and driver.

While en route, dispatch advised that the red suv was located at Reveres Food & Fuel.

Officers responded and found 53-year-old Russel Garrison, of Springville, in the driver’s seat of the red SUV. The red SUV that Garrison was found behind the wheel is owned by the Clark County Sheriff’s Office. The vehicle’s front end had heavy damage and was later towed.

Garrison exited the vehicle and officers conducted field sobriety tests. He failed those tests and was detained and transported to IU Health Hospital after a warrant was granted for a blood draw by Judge Nathan Nikirk.

Garrison  was medically cleared and transported to jail on charges of leaving the scene of an accident and operating a vehicle while intoxicated.