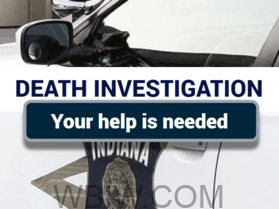 WASHINGTON CO. – The Indiana State Police in Sellersburg are requesting the public’s assistance in a death investigation that began on Saturday, April 16, 2022.

Around 7:30 p.m. Saturday, while mushroom hunting, an area resident found the body of a black male child near a roadway in a heavily wooded area of eastern Washington County. The resident immediately called 911 and the Washington County Sheriff’s Department responded. Detectives with the Indiana State Police in Sellersburg were then called to investigate.

At this time in the investigation, detectives need the public’s help in identifying the child. He is described as being a young, black male between the ages of five years old and eight years old. The child is approximately four feet tall and has a slim build and a short haircut. Investigators believe the child’s death occurred sometime within the last week.

Investigators have not released a time or cause of death as an autopsy is pending.

If anyone has information that could help in the identification of this child, please call Detective Matt Busick with the Indiana State Police in Sellersburg at 1-812-248-4374 or 1-800-872-6743.