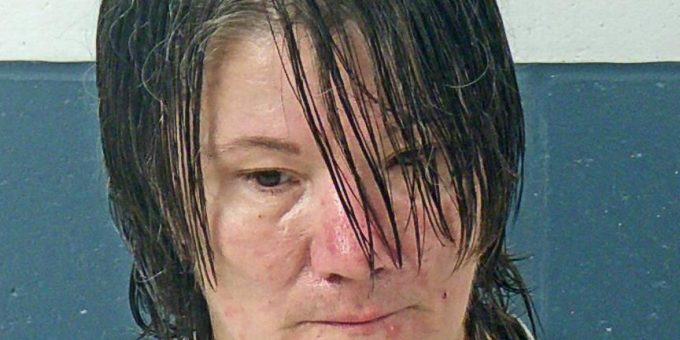 MITCHELL – A Mitchell woman was arrested on drug charges after Mitchell Police officers were called to “The Heartbreak Hotel” on South 5th Street after a report of a  fight in progress.

The caller reported a group of people were upstairs beating on 49-year-old Bridget Adams.

When police arrived they spoke to a male who told police he didn’t know anything about a fight. Police walked through the building and found no one fighting. Officers located Adams in an upstairs apartment sitting in a chair holding a glass smoking device called a “chicken bone” commonly used to smoke meth.

“When Bridget saw me standing in the open doorway, she quickly tried to conceal the item by hiding it under the blanket that was on her lap,” the officer wrote.

The officer asked Adams to remove the blanket from her lap and handed the officer the smoking device.

She was then detained. Adams stated, “I have disabilities and can’t live in the Lawrence county jail because of my disabilities!”.

She was then asked about a fight and Adams told police there was no fight.

Police also located a plate that had crystal meth on it near Adam’s chair.

Adams was arrested on charges of possession of meth and drug paraphernalia and was transported to the Lawrence County Jail.