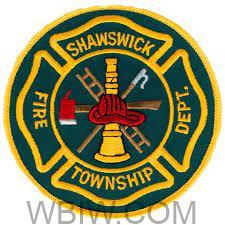 BEDFORD – Shawswick Township Volunteer Fire Department responded to the 140 block of Eastern Heights Drive after a report a propane tank had rolled down a hill and was now leaking.

When firefighters arrived they found the 500-gallon propane tank that was sitting at the top of a hill had rolled down the hill and crashed against a tree smashing in the lid and partially breaking the turn-off value.

“The ground under the tank had washed away after the recent rains causing the tank to roll down the hill about 20 feet,” said Shawswick VFD Chief Bob Brown. “When it crashed against the tree we couldn’t get to the valve to shut it off.”

When firefighters were able to get to the valve, which was damaged, it broke off.