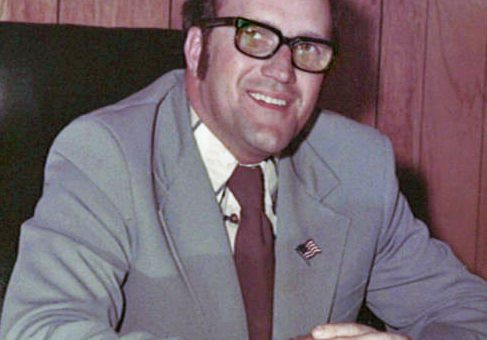 MITCHELL — In 1967 at age 31, Jerry Hancock was elected mayor of Mitchell.  He served 32 years being elected to 8 terms and was the longest-serving mayor in Lawrence County. He died on Friday at the age of 85.

Hancock was known for his go-get-it attitude and had no problem speaking his mind. He was often in the middle of the mix working side by side with city employees fixing water mains or plowing city streets.

Hancock graduated from Mitchell High School in 1955. Upon graduating, he worked with his father Milton “Pete” Hancock as a carpenter.  In 1957, he bought his first backhoe, dump truck, and trailer and created Hancock Construction Company.  As the construction business grew, trucking was added, along with Hancock Grain & Feed.

Jerry was very dedicated and gave many tireless hours striving to always make Mitchell a better place.  He was always ready to step up if someone needed a hand.

In his early years, he was involved with many clubs and organizations.  Jerry was active in the Mitchell Chamber of Commerce, the Mitchell Development Commission., A.R.A., Southern Indiana Mayor Roundtable, Salvation Army Board, Kiwanis Club, Moose, Elk & Eagle Clubs, and the Young Jaycees.  Over the years he received many noteworthy awards including being named a Kentucky Colonel, the Distinguished Service Award from the Mitchell Volunteer Fire Department, awards from American Legion Post No. 250, Indiana Green Thumb, Mitchell Slo-Pitch Association, Orleans Dogwood Festival, Mitchell Manor, Lawrence County Mental Health Association, United States Jaycees Distinguished Service Award, and the Mitchell Chamber of Commerce Citizen of the Year Award.  He was a member of the 1975 Hancock Construction Team All-State Champions.  He was voted the most influential person in Mitchell.

In retirement, he enjoyed operating his dozer, fishing, raising cattle, country music, and talking with people.  He loved his family and enjoyed being together.

Jerry’s funeral will be held at 11:00 a.m., Thursday, April 14, at the Mitchell First Baptist Church. The entombment will be at Mitchell Cemetery. Friends may visit at Chastain Funeral Home & Cremation Center on Wednesday, April 13th, from 3:00 p.m. until 7:00 p.m. and from 10:00 a.m. until the time of service at the church on Thursday.  Memorial gifts can be made in Jerry’s memory to the Mitchell Fire Department.