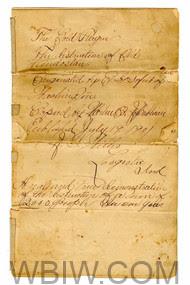 INDIANA – One recent addition to the Rare Books and Manuscripts Division’s Indiana State Library Manuscripts Small Collections was inspired by a reference question.

“The Cold Plague” is a curious document concerning a piece of Martin County history that has evaded historians: the rise and fall of Hindostan, Indiana. The manuscript in question consists of a transcription of an article written by C. G. Sefrit. The transcriber, one A. S. Willis, reports that it appeared in the Martin County Republican on July 19, 1901.  However, no trace of the Martin County Republican remains. It also includes an afterword written by Willis updating the reader on the growth of the area since the article was published. This account is updated and as unverified as much of the legend itself.

Little described in the document has been corroborated. What is known for sure is that in 1820 Martin County was formed and Hindostan was designated the county seat. Sometime after, probably soon after, an illness struck the town and may have contributed to a rapidly diminishing population. Beyond that, there are more conflicting reports than definitive answers.

“The Cold Plague” text is a colorful example of the kind of journalism covering the topic since. Sefrit describes the illness which did indeed strike the town, though almost certainly bringing fewer deaths than reported, as “the withering breath of [a] pestilential visitor” and recounts that “through the streets, the dread pestilence walked sparing neither old nor young.”

Though more recent research points to the likelihood that the claims that 2,000 people were reduced to only a few stragglers are wildly exaggerated, the town did eventually dwindle and the county seat was moved to Mount Pleasant. However, an engaging legend lives on.