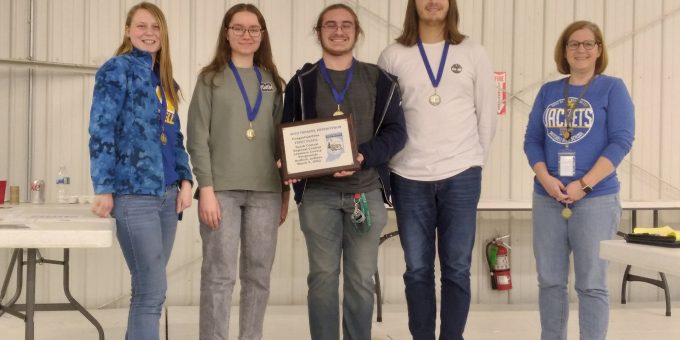 BEDFORD – The South Central Envirothon competition was held at the 4H grounds in Bedford on March 9. Sixteen teams of high school students from throughout southern Indiana competed in the contest. The top three teams from the regional contest will go on to compete at the state contest on April 27 at Conner Prairie. The winner at the state level represents Indiana to compete in the national competition at Miami University in Ohio.

Envirothon is a competitive learning event for high school-aged students. The contest tests the student’s knowledge of environmental resources including aquatics, soils, forestry, wildlife, and a current environmental issue. This year’s environmental issue was Waste to Resources. This issue looks at enacting innovative and creative solutions for managing wastes, turning them into resources through restoration, repurposing, and recycling for the benefit of the natural environment and future generations. The regional contests also include presentations by local professionals in each of these resource areas.

One of two teams from Mitchell placed first. It is coached by Robyn Embry.  Embry said she uses the Envirothon competition as a project for her AP Environmental Science class. Mitchell High School has placed in the top three teams at the regional Envirothon competition in 2011, 2012, and every year since 2014 (nine years in a row, eleven times total). Placing in the top three qualifies the team to compete in the state contest.

“I love Envirothon because it is such a good reinforcement of what I teach in my AP Environmental Science class, ” said Embry. “Students have a chance to hear personally from experts who work in the fields they’ve been learning about, and then to demonstrate their learning at the state competition through an authentic project that connects to their community. That’s the kind of learning that sticks with young people beyond high school.”

Embry noted there are several former Mitchell High School Envirothon team members who have gone on to college and careers related to natural resources, she believes competing in the Envirothon played some role in that.

With Mitchell’s legacy of winning at the contest, one of the students on Embry’s team,  Elizabeth Gillespie admitted, “I was really nervous when they started announcing the winners because I knew that we had a reputation to uphold for our school. I was actually shaking when we went up to get our medals.”

Team member Briley Waldbieser added that she enjoyed being able to see the competition from both sides. “I’m a student intern with the SWCD and NRCS offices, so seeing all the presentations and being able to apply all my prior knowledge helped my team and me succeed,” said Briley.

The second-place team at the South Central Contest was Corydon Central FFA #1, coached by Whitney Sauerheber.

“The high school students look forward to this event every year! The students enjoy learning about natural resources in Indiana,” said Sauerheber.

Sauerherber brought two FFA teams to the event and noted that Corydon Central FFA is excited to represent their school at the state event in April. Explaining that part of the state contest involves a presentation by the team she said her students are having a fun time building their presentation reflecting on ‘Waste to Resources’ in our community.

The third-place team was from Salem, coached by Seth Purlee. Purlee said the Salem FFA is always excited to participate in the Indiana Envirothon contest.

He added a special thank you to the Washington County Soil and Water Conservation District for always sponsoring the Salem teams and taking an interest in the FFA chapters in our county.

Purlee agreed that his team was looking forward to the presentation part of that state contest, “it gives the students a practical application of the issues our community faces. We are excited to represent our county, school, and chapter at the state level.”

South Central Indiana wishes all three of our teams the very best at the state contest April 27.