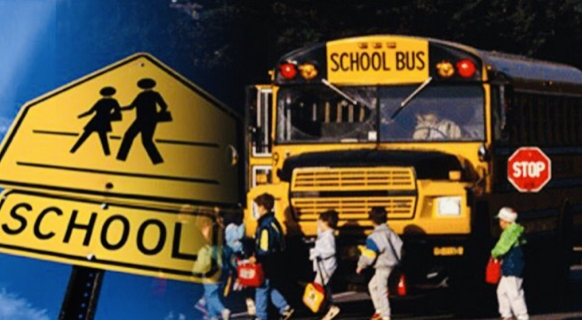 BEDFORD – State and local law enforcement agencies will have extra police officers on patrol the next few months as the weather is warmer and more children are walking and biking to and from school and to afterschool activities.

Police officers will also be on “high alert” and watching for bus stop-arm violations, speeding, and other forms of reckless driving.

Disregarding a school bus stop arm is a Class A Infraction and is a serious offense.

More than 200 police agencies across the state will be participating in the spring enforcement campaign, as part of an ongoing effort to prevent reckless driving in school zones and around buses.

Motorists need to be on alert for students walking to and from school and to after-school events. Students need to practice these safety precautions.

1. Look both ways and use crosswalks — but don’t assume you’re seen

Teach kids at an early age to look left, right, and left again before crossing the street. Then remind them to continue looking until safely across.

If kids crossroads with more than one lane, remind them that just because one car stops doesn’t mean cars in other lanes will, too.

Always use traffic signals and crosswalks if available — but don’t treat them like force fields. Remember drivers are humans, too, which means they won’t always see crosswalks or people walking in them.

The same goes for school zones. There’s a false sense that these are safe areas, but parents and children are rushing around and not always paying close attention to the road.

Even if the child has the right of way, teach them to make eye contact with the driver so both parties are aware of each other.

Be attentive when walking to avoid tripping, or worse, walking into traffic. Teach kids to put phones, headphones and devices down when crossing the street. It’s particularly important to reinforce this message with teenagers. Being distracted by technology while walking is becoming one of the major causes of pedestrian accidents.

This provides safety in two ways: a group of students may be more visible to a driver than a single student and it provides personal safety from someone who may wish to do harm to a student.

5. Walk on sidewalks or paths

It’s always best to walk on sidewalks or paths and cross at street corners, using traffic signals and crosswalks. If there are no sidewalks, walk facing traffic as far to the left as possible.

6. Cross with an adult

Children under 10 should cross the street with an adult. Every child is different, but developmentally, most kids are unable to judge the speed and distance of oncoming cars until age 10.

Set a good example by putting your phone, headphones, and devices down when walking around cars.

Encourage kids to be especially alert for cars that are turning or backing up. Teach them to look for turn signals or backup lights.

Teach kids it is unsafe to run out in the street between parked cars or run across the street not using the crosswalk.

Students should have some form of clothing, backpack, or other items that is reflective, or some form of light to shine as they walk. Dark clothing is a major factor when it comes to pedestrian versus vehicle accidents.