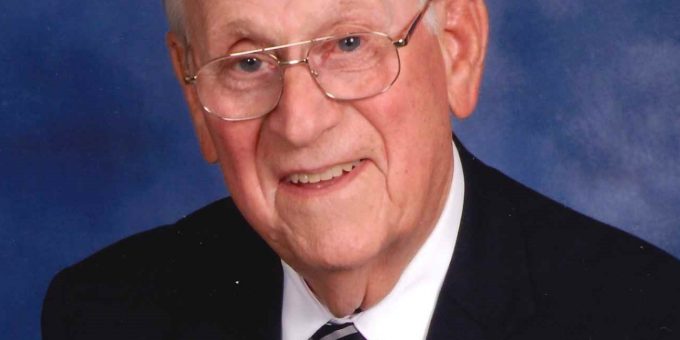 Victor H. Wagner passed away peacefully at the home of his daughter and son-in-law on March 20, 2022, in Jamestown, Ohio, surrounded by his loving family.

Vic was born June 23, 1928, to Oliver and Evaline Wagner and spent most of his life in his hometown, Bedford, Indiana. Vic was exceptionally proud of Bedford and Lawrence County. Having attended Bedford schools throughout his life, he met the love of his life, Norma Hawkins, in the third grade. They were married in July after graduating from Bedford High School in 1947, savoring forty-seven beautiful years of marriage. Norma preceded him in death on June 19, 1994. He later married Carol Phipps on September 23, 2000, who also preceded him in death.

The First Baptist Church in Bedford was Vic’s home church for many years. Vic loved the Lord and enjoyed sharing his faith. His fellow congregants were very dear to his heart. Vic loved Indiana University, Bedford High School, and BNL basketball. As a member of the Stone City Quartet, he delighted audiences throughout central and southern Indiana. Vic’s love for music and singing allowed him to evolve as a soloist for many events. His love for music was instilled in the hearts of his children, grandchildren, and great-grandchildren.

The prestigious Sagamore of Indiana Award was presented to Vic from Lt. Governor Becky Skillman, acknowledging his contributions to his local community and beyond. His many public service interests included active involvement in the Bedford Lions Club, the Masonic Lodge #14, and served as former president of the Bedford Regional Medical Foundation, which is now The IU Health Foundation.

Throughout his lifetime, he taught Sunday School and served as PTO president for several years. Many Bedford residents knew Vic through his 30 years of employment at Jim Day Furniture, enjoying his cheerfulness and quick wit.

Along with his parents, wife Norma, and his second wife Carol, Vic was preceded in death by his sisters Donna Walker, Louise McPike, Iris Wagner, and four brothers Billy, Gordon, Warren, and George.

Vic was also preceded in death by his much-loved great-grandson, Evan Thomas.

The family wishes to extend their sincere gratitude to the Bliss Place employees and residents where he lived from 2017 to 2020; receiving wonderful care and fellowship. They also desire to express their endless gratitude to Vic’s daughter and husband, Brenda and Darrel Hetzler, for the loving devotion and attentiveness he received while living with them the past twenty-two months, providing him with much happiness during his final days.