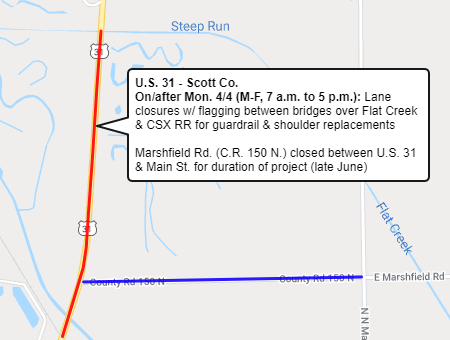 SCOTT/CLARK CO. — Indiana Department of Transportation contractor E&B Paving Inc. plans to start work on or after Monday, April 4, on two guardrail replacement projects in Scott and Clark Counties. Guardrail and shoulder replacements are planned on U.S. 31 between Austin and Scottsburg. Additional guardrail work will take place on I-265 in Clark County.

U.S. 31 in Scott County
In early April daytime lane closures will begin on U.S. 31 between the bridges over Flat Creek and CSX Railroad. Flaggers will be stationed at each end of the work zone to control traffic. The contractor plans to begin on southbound U.S. 31, followed by northbound. Marshfield Road (C.R. 150 N.) will be closed to thru traffic between Main Street and U.S. 31 for the duration of the project. U.S. 31 will be unrestricted outside of working hours (Monday through Friday, approximately 7 a.m. to 5 p.m.).

During the project crews will replace the eight-foot, paved shoulder on each side of U.S. 31 and install new guardrail. Work is expected to be complete in late June, weather permitting.

I-265 in Clark County
Also in early April overnight lane closures will begin on I-265 EB between I-65 and U.S. 31 in Clark County. The inside lane of I-265 EB will be closed from 9 p.m. to 6 a.m., Sunday through Thursday, while the guardrail is replaced in the area. Work is expected to be complete by the end of April. Interstate 265 will be unrestricted during the day.

INDOT reminds drivers to use extra caution, avoid distractions, and consider worker safety when traveling through active construction zones. All work is weather-dependent and schedules are subject to change.