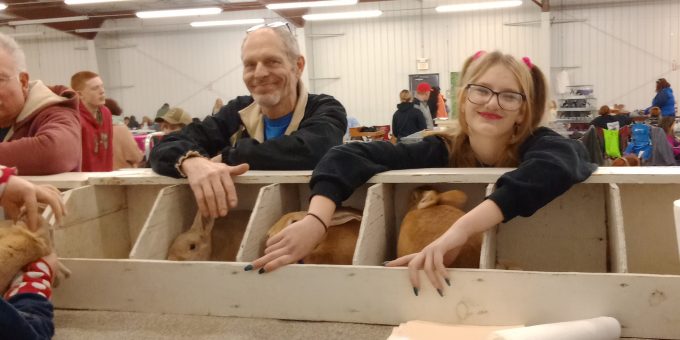 BEDFORD – More than 130 exhibitors showed their more than 2,500 rabbits entries in the show Defiance Friday night and Saturday at the Lawrence County Fairgrounds.

There were many specialty shows and four all-breed youth and open shows.

More than 28 breeds recognized by the American Rabbit Breeders Association were represented with 3,500 entries. Those participating traveled from across the state of Indiana and from the states of Georgia, Illinois, Kentucky, Missouri, Ohio, and Tennessee.

One thing that everyone looks forward to when they are showing rabbits is winning something. And, if you’re showing rabbits, why not aim for the stars – as in, Best in Show? So, how do you get a Best in Show win? There are a lot of ‘wins’ that your rabbit has to win first.

Essentially, they have to win the following, in this order:

Five Lawrence County 4-H Rabbit Club members earned the title of best of show. They were:

Rusty Westhoff, from Nashville, Tennessee, has been judging rabbits since 1991.

“I love doing it,” he added. “I was a youth member and raised rabbits as a boy scout. I have been all over the world judging rabbits. It’s a great hobby and I love working with the youth. Showing and caring for rabbits teaches them responsibility and accountability.”

Gordan Williams was 55-years-old when he became licensed to judge rabbits.

“My wife and I drove three hours to buy four Florida Whites for our children and fell in love with the project, ” Williams added. “I stood there watching and thought I can do that. I got my license and will continue to judge as long as I can stand.”

Judge Tom Berger has been judging rabbits since 2001.

“I enjoy people and working with rabbits,” he added.

Special thanks to the show sponsors.