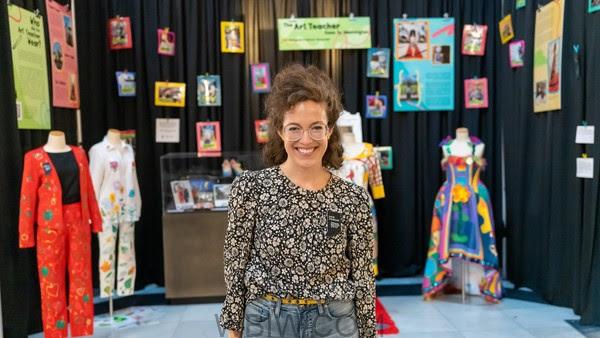 STATEHOUSE –  The Indiana Arts Commission announced today that an exhibit featuring 2020 Teacher of the Year Katie Pourcho has been installed at the Indiana Statehouse.

“This showcase demonstrates how the small hands of KID-designers can create a big impact,” said 2020 Teacher of the Year Katie Pourcho. “When our art programs flourish, our youngest Hoosiers can harness the dynamic power of the arts to shape the way our communities connect, converse, and cultivate. My students experienced this first hand as their designs became the bridge for them to meet Secretary Jenner and Governor Holcomb.”

Last Wednesday, Pourcho had the opportunity to visit the Indiana Statehouse with the students whose work is on display in the exhibit.

“A teacher’s impact extends far beyond the students in their classroom,” said Dr. Katie Jenner, Indiana Secretary of Education. “Miss Pourcho’s unique artwork shines a spotlight on how our students are developing skills in creativity, collaboration, communication, leadership, and beyond through art education. In addition to these skills, art is an important avenue in promoting mental health – in our schools, in our communities, and beyond. We know that great teachers change lives, and Miss Pourcho’s exhibit places that impact on full display – both in her classroom and now in the Statehouse rotunda.”

Pourcho’s clothing became her students’ canvas, and she became a walking art gallery. This pre-kindergarten through 2nd-grade wearable designs were seen by Indiana Senators, National Teachers of the Year, the PBS Kids media team, the First Lady, and the President of the United States.

These designs, as well as the story of how they came to be, are on display in the Statehouse rotunda through the month of March. This exhibit also serves as a celebration of Youth Art Month, which runs through March and celebrates art education programs in schools.

“Art educators like Miss Pourcho play a vital role in helping Hoosiers lead creative lives,” said Miah Michaelsen, Indiana Arts Commission Executive Director. “We are so grateful for her contributions to our state, and appreciate her sharing her talents and the talent of her students at the Indiana Statehouse.”

Watch a video of the exhibit installation and student visit, and hear from Miss Pourcho.