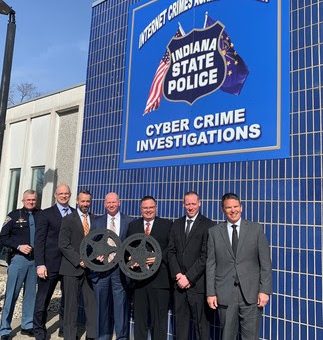 INDIANA – Friday morning, four investigators from the Indiana State Police (ISP) received awards from the United States Secret Service (USSS) for their use of training received at the National Computer Forensic Institute (NCFI) in aiding in their complex and highly technical investigations.

The NCFI was opened in 2008 and is run by the USSS and the Alabama Office of Prosecution Services.  Every year, the NCFI, through the USSS and its forensic partners conducts thousands of digital examinations.  In the fiscal year 2021, nearly 122,000 examinations were conducted, of which 40% involved violent crime investigations including homicide, robbery, rape, and child exploitation.

NCFI has begun to ask USSS Field Offices around the country to submit nominations for cases in which NCFI partners have utilized their training to help solve a significant case.  Of the more than 70 cases submitted, the ISP was involved in two of the 20 selected as NCFI Top Case Award recipients.

“In recognition of our partnerships with Internet Crimes Against Children (ICAC) and the Indiana State Police through the National Computer Forensics Institute…thank you for your great work”, commented Campion.