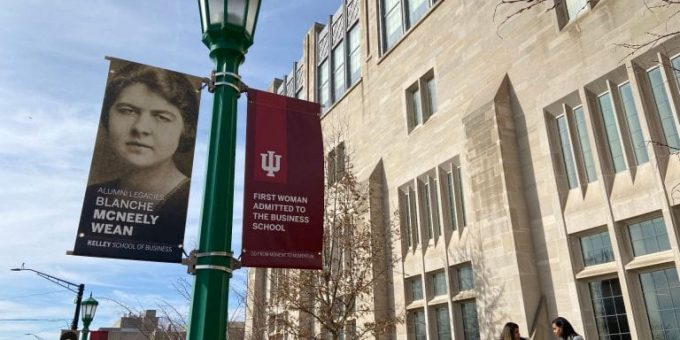 BLOOMINGTON – In advance of Women’s History Month, the Indiana University Kelley School of Business recently installed a new series of banners recognizing an accomplished group of female alumni who have been part of the school’s history and efforts to be inclusive.

The banners highlight trailblazers not only at Kelley but also at the university level. They included one of the school’s first female faculty members and someone critical to the creation of a network for women in the business school. The banners highlight successful women who were the first to graduate from the school with bachelor’s, master’s, and doctoral degrees.

They also recognize the first woman to earn a Kelley degree through the Consortium for Graduate Studies in Management – an organization that has greatly contributed to increased diversity in corporate management ranks – and the first Kelley alumna to be named an IU trustee.

In 1922, just two years after its establishment, the School of Commerce (today the Kelley School) admitted its first female student, Blanche McNeely Wean. A Bloomington native and the daughter of the owner of a grocery store and the local Yellow Cab Co., she had enrolled at IU two years earlier to study education but took as many business classes as she could.

“She shared with a male professor that she had ambitions to join the business world, stemming from her work experience. The professor told her that business was a ‘man’s world’ and suggested she stick to education,” wrote Ellie Kaverman, in an article for the Indiana History Blog.

She was soon followed by two other women, Anna Hasler and Athleen Catterson, who transferred from the University of Chicago and were admitted concurrently. All three women graduated together in 1923, and McNeely Wean was the first to meet all of IU’s degree requirements.

After graduation, McNeely moved to Lafayette to begin working as a teacher and married Francis Wean in 1926. In 1930, her husband unexpectedly passed away, leaving her to raise three daughters under the age of three at the onset of the Great Depression. She returned to Bloomington and began to substitute teaching stenography at the school.

While teaching at IU, McNeely Wean worked on obtaining her master’s degree (in economics) and was offered a trial position as the head of the business department at Central Normal College in Danville (later renamed Canterbury College). Rather than uprooting her family, she woke up every Monday morning at 2:30 a.m. to drive to Danville and teach a 6:00 a.m. class.

In 1932, McNeely Wean received an official offer from Central Normal College to head the business school, serve as the dean of women for the college, and serve as the student newspaper’s advisor—with the expectation that she would first graduate with her master’s degree from Indiana University that same year. She graduated with a Master of Arts degree in May 1932, and then moved her family to Danville. She continued at Central Normal College for fifteen years while also working as an accountant for outside businesses. All three of her daughters earned their undergraduate and graduate degrees at Indiana University.

Raised on a northern Indiana farm, Esther Bray came to IU in 1922 and earned a business degree five years later. A decade later, she was invited by President Herman B Wells to return and teach at the school. She went on to teach business education for 34 years.

By comparison, the prestigious Wharton School at the University of Pennsylvania, founded in 1881, would not appoint its first female faculty member, Dorothy Swain Thomas, until 1948. The first woman to become a tenured professor at Harvard Business School, Regina Herzlinger, was appointed there in 1971. Mary Munter, the first woman to teach full-time at Dartmouth’s Tuck School of Business, arrived in 1983.

For many years, Bray would be the only woman on the IU business school faculty. “Esther was instrumental in the development of young women both in and out of the business school,” noted Ellie Kaverman, in an article produced for IU’s bicentennial.

In naming her its “Woman of the Century” in 1999, the Bloomington Herald-Times quoted Bray’s granddaughter as saying, “She never stopped once to think that she was working in a man’s world. When it came push to shove, she stood up for herself. She said it was hard. She did it. She never lost her integrity, her poise, and her character.”

When Bray died in 1999, IU faculty adopted a memorial resolution in her honor, calling her a “role model for women.”

Today, more than 110 women teach at Kelley, including nearly 45 in tenured positions. Among them and leading the school is Idalene “Idie” Kesner, who in May 2013 became its first female dean.

MaryEllen Kiley Bishop, who earned a business certificate in management and administration in 1978 and a Bachelor of Science in marketing in 1979, is the first alumna of the Kelley School to become an IU trustee.

Today, the vice chair of the IU Board of Trustees and chair of its Academic Affairs and University Policies Committee, Bishop has played an active role in a variety of professional organizations, earning national citations for her work. She has been a tireless volunteer on behalf of IU, serving as chair of the IU Alumni Association in 2008, as co-chair of the Planned Giving Committee for the IU School of Medicine, and as a member of the IU Athletics Committee.

Also, a 1982 graduate of the McKinney School of Law, she serves on the school’s Board of Visitors and is a partner at Cohen Garelick & Glazier in Indianapolis. She has served on the steering committee of the Colloquium for Women of IU and is member of the board of the IU Foundation and the Women’s Philanthropy Leadership Council.

Two other women associated with Kelley have served as IU trustees – Abbey Stemler, associate professor of business law and ethics and a Weimer Faculty Fellow at Kelley, and Cynthia Stone, who retired as a senior lecturer in the Kelley School of Business in May 2017. Stemler served as a student trustee in 2009-11 when she attended the Maurer School of Law. Stone, who served from 1993 to 1996, was the first university employee elected to the board and was its first openly gay member.

Lillian Pauline (Hunnicutt) Gibson received her Master of Science in Business in 1939. Little is known today about her life after graduation. She passed away in 1987.

Marjorie “Marge” Perry Person was of the two first women to earn a doctoral business degree at the Kelley School, each receiving their degree on June 14, 1965. A native of Mound City, Mo., she earned a bachelor’s degree in English and Business at Northwest Missouri State. After earning her MBA, she joined the faculty at Indiana Purdue Fort Wayne as chair of the Department of Marketing and taught there until her retirement in 1981.

“She was noted for her leadership in the teaching of marketing, her contributions to the university’s research and service missions, and her many years of generosity to the university,” reads an Indiana Senate memorial resolution after her passing in March of 1998. “Her interest in students went well beyond the classroom. She believed teaching was a two-way street. Her students learned from her and she learned from them.”

Her son Bill recalled how Perry Person learned shortly after beginning teaching at IPFW that she was earning only two-thirds of what her male colleagues were making.

“Without delay, Professor Person voiced her objections to the university president, who responded that the men were being paid more because they were heads of households and responsible for the support of their families. She responded that as a widow she, too, was head of a household and the sole support of a child,” the resolution said. “After thinking a few moments, the president called out to his secretary, ‘For payroll purposes, Marge is a man.’ Throughout her career Marge continued to serve as a mentor for women in male-dominated professions.”

She was active in numerous business and community organizations in Allen County, including the Greater Fort Wayne Chamber of Commerce, and she established an endowment for a scholarship at IPFW in honor of her brother.

A native of Massillon, Ohio, Saundra Marie Mitchal was the first female Kelley alumna of the Consortium, graduating with an MBA in marketing in 1973. She also earned a Bachelor of Science in Business Administration degree from Kent State University.

After graduating from IU, she became vice president of marketing at Neutrogena, where she was for nine years. She directed a $20 million, 15-person marketing organization for the $250 million health and beauty products maker. She enhanced brand equity for the company, which was eventually purchased by Johnson & Johnson.

Mitchal also served as a vice president for marketing at Avco Financial and its U.S. division Avco Financial Services between 1994 and 1997, before becoming Fannie Mae’s director of consumer marketing. In 2005, she became chief of marketing for the DC Lottery and was retired from there when she passed away last June.

She appeared in many business magazines throughout her career, profiled often because of her leadership in the field of marketing. She was also a proud, founding member of the African American Women’s Business Network in New York City.