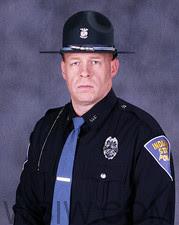 BLOOMINGTON – At a recent post-meeting, Lieutenant Paul Bucher, Bloomington District Commander announced that Trooper Chance Humphrey has been selected as the 2021 “Trooper of the District”. Trooper Humphrey will be recognized later this year in Indianapolis by Superintendent Douglas G. Carter along with other Troopers who were selected by their respective districts.

“This honor is bestowed upon a deserving Trooper that exemplifies the Department’s high standards and expectations as related to the overall mission,” emphasized Lt. Bucher, “and a Trooper’s professionalism, integrity, well-rounded work ethic, service to the community both on and off duty, and assigned responsibilities are just a few areas taken into consideration when nominated.”

Trooper Humphrey serves on the Bloomington District ACES (Aggressive Criminal Enforcement Section) which conducts proactive criminal investigations throughout Brown, Greene, Lawrence, Monroe, Morgan, and Owen Counties. Humphrey’s work with that team did not go unnoticed in 2021 as Trp. Humphrey was responsible for arresting 191 defendants for 362 criminal arrests with 191 of those being felony charges.

“Trp. Humphrey displays all the qualities expected of a professional. His work ethic is second to none and he has phenomenal relationships with local officers, assisting them on a regular basis. His criminal efforts speak for themselves. There is no doubt in my mind that he has saved lives and makes a positive difference in our community every single day.”

Trp. Humphrey, a Lawrence County native, was born and raised in Springville. He is a 2002 graduate from Bedford North Lawrence and attended the University of Indianapolis. He graduated from the 78th ISP Recruit Academy in 2018 and has been assigned the Bloomington District since his graduation. Besides being a member of the district ACES, he is a member of the Mobile Field Force Team and a School Resource Officer.

Trp. Humphrey has been married to his wife, Becky, for 12 years. They have two children, Payton and Piper.