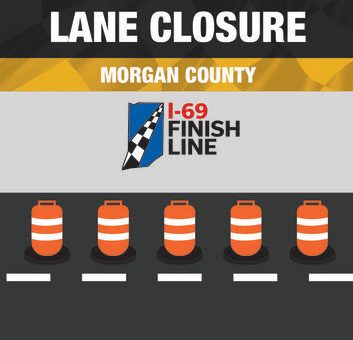 MORGAN CO. – As temperatures rise and daylight hours increase with advancing clocks this Sunday, drivers should stay alert for changing and increasing activity to complete the I-69 Finish Line project in Morgan County.

For the safety of motorists and highway workers in the lengthy work zone, contractors are using orange barrels to close the left, inside lane of State Road 37 north of Martinsville starting today. This lane closure will be in place around the clock and affect southbound S.R. 37 between Martinsville and Johnson County and northbound S.R. 37 from the Egbert Road overpass to Banta Road. The lane closures are expected to be removed by late April.

Crews are working six days per week as construction factors such as weather, sunlight, materials, and equipment permit. Crews are performing work in the center median including removing temporary crossovers, earthmoving, placing the crushed stone, and installation of cable barriers and railings. The speed limit is reduced to 45 mph.

Work to remove the paved crossover in the I-69 median south of Martinsville has closed the left, inside lanes this week near the Indian Creek bridge. Crews will close single lanes of I-69 as needed to complete finishing touches including the final layer of asphalt pavement, permanent striping, signage, railings, grass plantings, drainage work, and the painting of noise barriers and retaining walls.

Crews expect to begin work in mid-March on two roundabouts in Martinsville:

The S. Madison Avenue bridge over I-465 is now closed and the detour follows Thompson Road, Keystone Avenue, and Hanna Avenue. INDOT reminds detoured drivers to slow down and watch for students near the University of Indianapolis campus. Hanna Avenue has a 25-mph speed limit with multiple crosswalks.

A variety of activities are occurring along I-465 on the southwest side of Indianapolis between I-70 and I-65. In addition to the replacement of the Madison Avenue and Mooresville Road Bypass overpasses, crews are installing temporary concrete barriers and patching winter potholes.

Nighttime I-465 traffic should seek alternate routes and expect delays during the demolition of the Madison Avenue bridge. I-465 traffic may be reduced to one lane in each direction with 20-minute stops between 11 p.m. and 4 a.m.