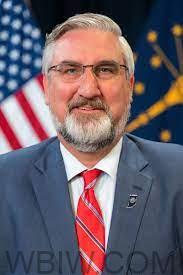 As a state, we will do our part to try to prevent the further indiscriminate killing of Ukrainian civilian men, women, and children. I encourage Indiana residents to support the humanitarian efforts for Ukraine through their local communities, religious organizations, and non-profits and show our true Hoosier spirit.,” said Gov. Holcomb.

Gov. Holcomb has issued an executive order taking specific actions to show a commitment for the citizens of Ukraine and condemnation of the Russian government.