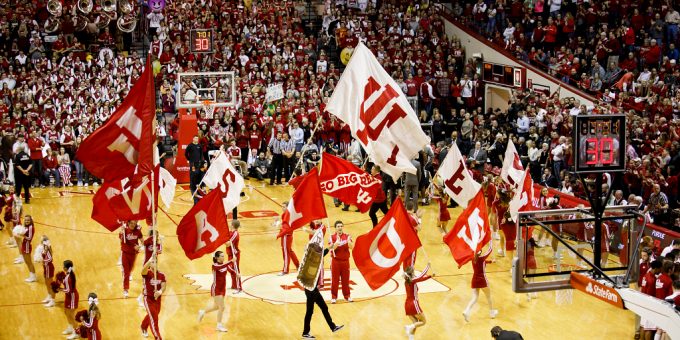 BLOOMINGTON – As the game clock trickles down second by second and reaches the 8:00 mark in the second half, all 17,222 fans at Simon Skjodt Assembly Hall know what’s coming.

The referee’s whistle blows and a horn from the scoreboard booms, sending the Hoosiers and visiting teams to their benches for a brief rest and clearing the way for a storied Indiana tradition.

Trumpets from the Big Red Basketball Band bellow out the opening cheerful, high-energy notes initiating the start of this choreographed routine.

From underneath the left goal, a cheerleader carrying a “Go Big Red” flag leads a group of cheerleaders across all 94 feet of Branch McCracken Court to the far corner.

If the crowd wasn’t standing already, they are now, clapping and cheering along as the Greatest Timeout in the History of College Basketball is underway.

“The band, cheerleaders, and fans form an important trifecta of a relationship for the environment at basketball games,” said Eric Smedley, director of the IU Marching Hundred and Athletic Bands and associate professor of music in the Jacobs School of Music. “That timeout involves all three, which is a home run. Since we’ve been doing it so long, there is a special energy in the building when we approach that timeout.”

The two-minute soundtrack for this Simon Skjodt Assembly Hall tradition is the “William Tell Overture” — a song easily recognizable as the theme song to “The Lone Ranger” — which the 72-member band blends into a rousing rendition and arena sing-a-long of the “Indiana, Our Indiana” fight song. Noise levels commonly reach over 100 decibels during the performance which is comparable to a jet flyover or jackhammer.

Between 30 and 40 enthusiastic cheerleaders enhance the moment with intricate choreography that also includes the 18 flags:

“It is not that it is difficult, there are just a lot of moving parts that we have to coordinate,” said Julie Horine, IU head cheerleading coach. “The cheerleaders get the most nervous, in a fun way, of making sure that they don’t run into each other when crisscrossing the flags.”

“It creates an awesome environment,” said Doug Harper, an IU cheerleader from 1987 to 1991. “As the game goes on, the under-eight timeout is a nice way to build onto that wonderful game-day atmosphere. You have an event that gives everyone a chance to collectively be an Indiana Hoosier.”

Horine has been the head cheerleading coach for 33 years and was a cheerleader herself from 1985 to 1989. As a key steward of this beloved ritual, Horine has a couple of favorites. It’s become a tradition that an experienced member of the cheerleading team is granted the right to lead with the “Go Big Red” flag. She also enjoys the collective hum from the crowd singing along to “Indiana, Our Indiana.”

“But my absolute favorite moment is watching the visiting team’s crowd take in the whole timeout,” she said. “They truly watch everything. This is when you know you have something special by the looks on their faces.”

The timeout is one of many rich traditions special to the program. Similar to its five NCAA Championship banners, Martha the Mop Lady, and the candy-stripe warm-up pants, this timeout is a core part of Indiana basketball and the experience of seeing a game at Simon Skjodt Assembly Hall.

“We have created an environment that many other schools want for their home games,” Horine said. “College sports is all about the team, the cheerleaders, the band, and having the best fans around. When all those components come together, that is when you know it’s Indiana.”

Technically there is no official name for this timeout, only increasing lore. Sportscaster Billy Packer labeled it “The Greatest Timeout in the History of College Basketball.” Fans latched onto that name, with IU Athletics using the moniker sporadically. The band, cheerleaders, and game operations staff refer to it as “The William Tell Timeout.” But other names are also commonly used by IU fans and media members, like “The Under-8 Timeout” or “The Flag Timeout.”

While it has many aliases, it’s understood what’s being talked about when IU basketball and timeout are discussed together.

According to recently retired IU Athletics administrator and public address announcer Chuck Crabb, “William Tell Overture” was introduced in 1980 by celebrated former band director Ray Cramer. It was first performed at a football game before Cramer introduced it at basketball games.

In its infancy, the band’s performance was the sole component. Over the years, the pageantry and spectacle grew with more choreography and involvement from the cheerleaders.

In 1981, the idea to introduce the “Go Big Red” flag came from a brainstorming session between Crabb and primarily two cheerleaders, Bill Patterson and Janet Campbell, returning from a road game.

For most of the decade, the smaller, handheld flag was the only major addition to the routine. In 1989, Horine’s senior year, she was the mastermind who added the larger-than-normal IU flags to the performance.

A 1997 meeting between heated rivals from the south upped the ante for the timeout and set off a chain of one-upmanship.

Horine invited her friend and counterpart at the University of Kentucky to take part in the timeout performance during a game at a neutral site: the now-demolished Hoosier Dome. Kentucky brought its own large UK flags, and it provided a friendly display between the opponents.

For the next meeting, with Crabb’s approval, Horine added the popular display of spelling out Indiana by letter on individual flags. Kentucky followed suit at their next encounter by spelling out their state’s name with flags.

Not to be outdone, Horine responded by adding the individual letters and flags for “Hoosiers” to create the ensemble Indiana fans love.

To this day, Kentucky is the only other university to jointly participate in the routine.

“It was truly special and awesome to see all of those flags at the same time on the court,” Horine said. “It was a magical moment for all fans from both schools at this game every year.”

In addition to having the under-eight-minute media timeout spot locked at home, the routine continues to travel with the team at IU’s other neutral-site games such as the Big Ten Tournament and Crossroads Classic, where the team always requests to have that block of time.

After four decades, a milestone is pending for the Greatest Timeout in the History of College Basketball: The 1,000th rendition is set to occur between the 2025 and 2027 seasons.

IU Athletics discovered it hit 750 performances during the 2014-15 season and plans to meticulously tabulate the figure in the coming years while factoring in neutral-site games and the pandemic.

Thirty years after Harper’s time as a cheerleader the memories of participating in the timeout and leading the crowd still hold strong for him.

“It is a rush,” said Harper, who lives in Atlanta where he commonly teases his neighbor who went to the school up north. “You’re just excited because you love your school and love your basketball program. You have a chance to help get the crowd up and excited. It’s a neat opportunity as an IU cheerleader to feel like you can show your enthusiasm for your school and draw other fans into it too, at the peril of the opponent.”

Whether a guest is witnessing the timeout for the first time or a longtime season-ticket holder is participating in their hundredth occasion, The Greatest Timeout in College Basketball is an impressive sight to behold and leaves a lasting impact second to none.

“You can pay someone to spin plates or juggle chainsaws, but when you get over 17,000 fans screaming to ‘William Tell,’ it’s just better than anything out there,” Harper said. “It should make a huge difference for the people coming to the game, giving them a memory for something really special they saw while at Simon Skjodt Assembly Hall.”

“Celebrating 50 Years at Simon Skjodt Assembly Hall” is a collection of stories resulting from a collaborative effort between IU Studios and IU Athletics to pay homage to one of college basketball’s most iconic venues and its importance to Indiana basketball.