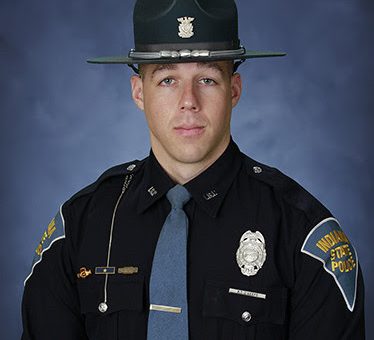 MARSHALL CO. – Indiana State Police Superintendent Douglas Carter recently announced the reclassification of Senior Trooper Patrick O’Keefe to the position of a detective at the Indiana State Police Toll Road Post.  Detective O’Keefe earned his assignment to Field Investigations through the completion of written testing and a competitive interview process.

O’Keefe received his commission to the United States Army from the University of Notre Dame ROTC and served in the National Guard from 2005-to 2009 where he became Airborne Infantry. O’Keefe went on to become commissioned as an Officer in Aviation in 2010.  He completed Army Flight School in 2013 before being deployed to the Middle East in 2015 where he served as a Platoon Leader in an Air Assault Company flying UH60 Blackhawks.  O’Keefe was again deployed in April of 2020 where he served as Captain of an Assault Helicopter Company supporting combat and support operations in Iraq and Syria flying UH60M Blackhawk helicopters.

O’Keefe lives in Elkhart County with his wife and two children.