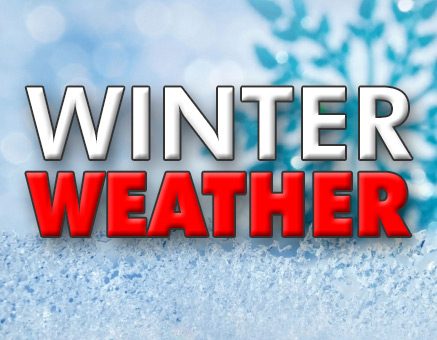 BEDFORD – The Lawrence County Commissioners say Lawrence County Highway crews are currently out pre-sanding county roads at this time due to the potential of hazardous weather conditions.

The first wave will arrive Wednesday evening, with the second likely to have a big impact on the Thursday evening commute with the potential with snow, ice, sleet, and or just rain are all possible.

Commissioners are asking residents to remain alert and check their favorite weather source for changing conditions.

Much colder air has arrived, with many spots running as much as 25 degrees colder than this time than yesterday. Highs will only be in the low-to-mid-30s today under a mostly to partly cloudy sky.

The colder air mass remains in place as this next storm system moves in. This system comes in two waves, with the first starting this evening after 7 p.m., bringing a combination of snow along and north of I-70, with a freezing rain mix in the southern part of the state.

This exits by daybreak Thursday, causing some slippery roads for the Thursday morning commute.

According to forecasters, the second wave arrives after the lunch hour Thursday. With temperatures near the freezing mark, central Indiana sees a combination of rain and freezing rain south, freezing rain and sleet central, and snow likely north.

Temperatures will range from the 20s in northern Indiana to just above freezing in the southern part of the state, but it’s a combination of surface temperatures and what’s going on just above the surface that determines the precipitation type.

While temperatures look to be just below freezing Thursday afternoon along the I-70 corridor, a slightly warmer air mass just above the surface will give Indiana a freezing rain setup. This will also have a big impact on how much precipitation we receive.

The combination of this wintry mix continues through the evening commute Thursday, making travel difficult.

Weather forecasters predict this system will wrap up early Friday morning but will leave behind dangerous travel through the morning rush hours.

Northern Indiana can expect 1-3 inches, with up to 1 inch of snow along with ice accumulation up to 0.15 inches on either side of the I-70 corridor, including the Indy metro. Little to no snow is expected south, but up to 0.2 inches of ice due to freezing rain/sleet mix will be possible.