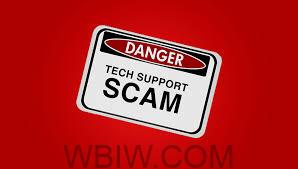 INDIANA – A tech support rep calls and offers to fix a computer bug you haven’t even noticed, or a popup warning appears on the screen instructing you to dial a number for help. In this con, scammers pose as tech support employees of well-known computer companies and hassle victims into paying for their “support.”

How the Scam Works:

A call comes through on the Caller ID, a popup on the computer screen or you receive an email from someone claiming to be with tech support from a well-known software company. Microsoft, Comcast, Norton, and Dell are all popular choices. The scammer creates a sense of urgency—the computer is sending error messages, they’ve detected a virus, or your computer is about to crash causing a massive loss of data!

Rest assured the tech support employee can fix the problem but only if they’re allowed to remote access the troubled machine. Once access is granted, the caller will often run a “scan” and claim the computer is infected with viruses. The offer is made to fix and repair the machine for a fee. That may not be the end of the scam. If you allow remote access, malware may be installed on your machine. Malware often scans files in search of personal information, which scammers then use to commit identity theft.

According to a recent BBB Scam Tracker report, a Bloomington woman reported losing $1,400 to this tech scam. She called the number in a pop-up message after her computer screen went black. At the time, she believed she was speaking to a technician at Microsoft. “He then told me that he will download an ad blocker Adguard and cleaner and charged me $699 for the software – I thought this was a good way for me to protect my information online, so I wrote out a check for $699.” Later, she realized additional charges had been taken from her account and that’s when she knew she had been scammed. She is now taking steps to shut down her bank account and file a police report.

Tips to spot this scam:

If you are a victim of a tech support scam:

Learn how to protect yourself, go to “10 Steps to Avoid Scams” and sign up for scam alerts.

ABOUT BBB SERVING CENTRAL INDIANA: For more than 100 years, Better Business Bureau has been helping people find businesses, brands, and charities they can trust. In 2020, people turned to BBB more than 220 million times for BBB Business Profiles on more than 6.2 million businesses and Charity Reports on 11,000 charities, all available for free at BBB.org. There are local, independent BBBs across the United States, Canada, and Mexico, including BBB serving Central Indiana, which was founded in 1916 and serves 46 counties.