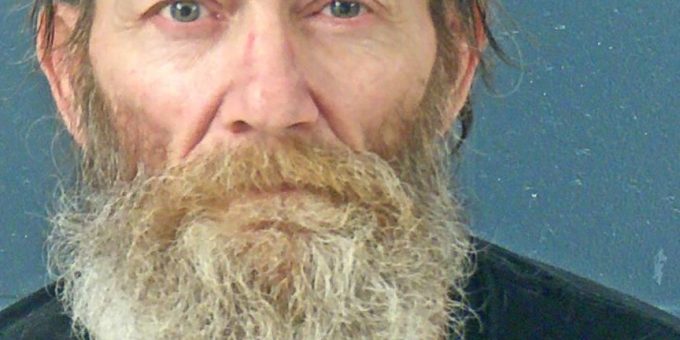 MITCHELL – A Mitchell man was arrested Saturday after Mitchell Police officers conducted a “knock and talk” at “Heartbreak Hotel” on South 5th Street.

Heartbreak Hotel is a rooming house and has multiple rooms inside the house which are numbered as apartments. All of the tenants share a bathroom, shower, kitchen, and living room. Officers have responded to this rooming house for many incidents involving drug overdoses, domestic violence, citizen disputes, and thefts. Over the past two weeks, officers have noticed a high volume of foot traffic going in and out of the house. The high volume of foot traffic occurs in the late evening hours up until the early morning hours.

Officers approached the room they noticed foot traffic was coming and going.

Officers entered 57-year-old Matthew VanMeter’s room and asked him about the people coming and going from his room.

VanMeter told the officer, “none of that goes on here”.

Officers then noticed a blue plastic baggy with the corner ripped off containing meth residue on a wooden nightstand next to VanMeter’s door.  VanMeter told the officers the bag was not his. VanMeter then told officers that he had a glass smoking pipe and syringe next to his bed.
VanMeter was arrested on charges of possession of meth, unlawful possession of a syringe, and possession of drug paraphernalia.