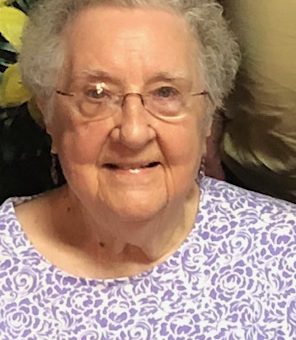 She was born on July 6, 1929, in Anderson, Indiana to Lothar and Violet (Kelly) Henning. She married Robert Everett Smith of Plymouth, IN at the Noble Street Methodist Church in Anderson, Indiana on June 8, 1950. Helen attended Anderson High School and graduated in 1947. She then attended Ball State Teachers College, graduating in November 1950 with a B.S. degree. She received a Master’s degree in Nutrition from Ball State University in May of 1970. Her teaching career started at Ball State in the early 1970s and she received a Doctorate in Nutrition Education from Purdue University in May of 1977. In 1978 she became the Home Economics Chair at Ball State University, retiring in May of 1990.

In lieu of flowers, the family requests memorial contributions to be made in Helen’s memory to the First United Methodist Church, Bedford.

Ferguson-Lee Chapel of Thorne-George Family Funeral Homes in Bedford has been entrusted with
Helen’s care and arrangements.

Online memories and condolences may be shared with the family at www.FergusonLee.com.