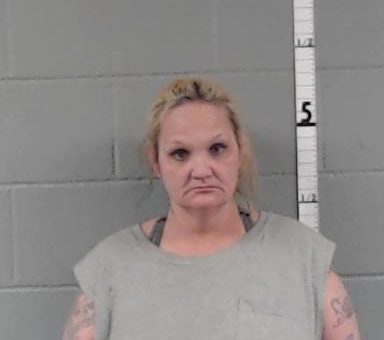 SALEM – An Austin, Indiana woman was arrested on numerous drug charges after Troopers stopped her for erratic driving in rural Washington County.

Around 2 p.m. Tuesday, Trooper Mark LaMaster was traveling east on State Road 56, east of Salem, when he observed a silver Pontiac G6 in front of him cross over the center lane multiple times. The car was also following too closely to the vehicle in front.

At the time of the observation, Trooper LaMaster was driving in an unmarked police car and out of uniform, which prevented him from stopping the car himself. He radioed for any nearby units, and Trooper Brett Walters advised he was in the area near Little York and would be available to stop the Pontiac.

The Pontiac turned on to County Roads, and Trooper LaMaster continued to follow and update Trooper Walters on its position. Trooper Walters eventually stopped the car on Little York Road, east of Mount Road.

The driver identified herself as Heather J. Sizemore, 44, from Austin, Indiana. During the stop, Heather Sizemore and her female passenger appeared extremely nervous, and the pair exhibited other behaviors which aroused Trooper Walter’s suspicions of possible criminal activity.

Trooper Walters requested the help of a nearby Austin Police K-9 unit which alerted to the possible presence of drugs.

Trooper Walters and LaMaster were assisted by fellow ISP units from the Sellersburg Post and K-9  officer Scott McCoskey from the Austin City Police Department.