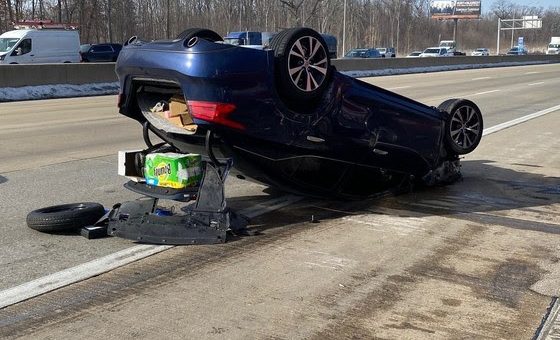 LAKE CO. – Tuesday at approximately 1:42 p.m., Troopers with the ACP (All Crimes Policing) Team attempted to perform a traffic stop on a blue 2017 Nissan Maxima for traffic violations.  The driver failed to stop, and a pursuit was initiated northbound on I-65 from the 240 mile-marker (Lowell exit).

During the pursuit, the suspect was able to avoid stop sticks that had been placed on the roadway at different locations.  However, at the 255.2-mile marker, another trooper attempted to put stop sticks in the path of the suspect vehicle.  The driver attempted to avoid the sticks and while doing so, made a very aggressive evasive action.  This action resulted in the vehicle overturning and coming to a rest on its roof.  The subject was taken into custody without further action by law enforcement.

As is standard procedure, the driver was transported from the scene to St. Mary’s Hospital for medical clearance before being transported to the Lake County Jail.  The driver was reporting pain in his buttocks but nothing else at the time.  While at the hospital, routine tests revealed a serious preexisting condition that was potentially life-threatening.  The subject was flown out to Chicago for further treatment.  His condition is currently unknown.

The identity of the driver is being withheld pending formal charges by the Lake County Prosecutor’s Office.  Charges being submitted for consideration include the following resisting law enforcement with a vehicle, possession of marijuana, and two counts of reckless driving

All suspects are considered innocent until/unless proven guilty in court.