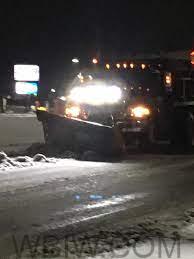 BEDFORD – With the first big winter storm scheduled to hit this week, Lawrence County Highway Department crews are getting prepared.

“Everything is prepared,” said Commissioner President Rodney Fish. “The vehicles are in good operation and we have a good supply of sand and salt.”

Fish stressed that individuals must be responsible for their own safety.

“We will do everything possible but everyone must be responsible for their own safety. If we get this major ice storm, be prepared – stay home,” Fish added.

The commissioners will make public safety announcements to local media outlets, the public is stressed to stay tuned and visit sites for that important information.

“Crews work extremely hard to do the best they can but there are limits when it comes to these type of weather events,” Fish added.

Crews will begin treating roads before the storm hits, however, heavy rain will wash away the sand and salt if it’s put down too early. . Crews and Emergency Management will watch weather reports and stay on top of the situation as the storm progresses.

Executive director of the Lawrence County Tourism Commission Tonya Chastain asked permission to use the Williams Covered Bridge for their fourth annual dinner. The event will be held on September 10, 2022. She expects around 200 people to attend. The bridge will be used from 8 a.m. until 9 p.m. on that day.

Clerk Billie Tumey requested approval of the MicroVote contract. It is a three-year contract at $13,000 a year. MicroVote General Corporation has been providing dependable election equipment and supports to Lawrence County for several years.

The commissioners approved a contract with T.G. Construction to build a wall in the voter registration office at Courthouse Plaza. The cost of this project totals $22,703.

Sheriff Mike Branham reported there were 136 inmates at the jail Tuesday morning. That number puts the jail at 75.5 percent capacity. Of those inmates 115 were male, 21 females, one Level 6 felon, 12 Department of Correction holds, one parole hold, and one  Immigration and Customs hold.

The average daily population in January was 142.

“That was below the 80 percent capacity for the first time since COVID hit,” added Sheriff Branham. “The length of stay average was 44 days which is up, we are holding inmates a long time.”

The commercial refrigerator in the kitchen at the jail was replaced.

“We were able to get it at a good price, $19,000,” said Sheriff Branham. “That was a lot cheaper than retail but it arrived damaged.”

The sheriff said the county can expect a large hospital bill. An inmate was transported to a local hospital and then to an Indianapolis hospital for treatment in 2021. The inmate was admitted for 10 days. The county inmate health insurance policy has a pool of $90,000 to pay for medical costs. However, the bill exceeded that amount and the county owes $38,000.